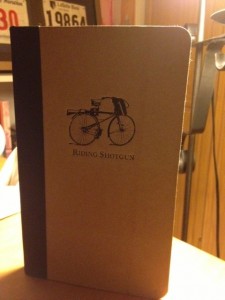 As many of you know, I’m in the middle of National Novel Writing Month (aka NaNoWriMo) and, as of this writing, I have more than 10,000 words written.

I thought writing a novel wouldn’t be a big deal. I do, after all have a published book (cough, Marketing in the Round, cough) and I write here every, single day. I even spent three months outlining the book (which is allowed as long as you don’t write any words) and I told myself I’d just get up an hour earlier every day and write.

And that’s exactly what I’ve done.

I’ve even been keeping pace with my friends who are also participating via Facebook and Twitter. It’s been fun. But it hasn’t been easy.

I got six chapters in when, on Saturday, I decided it was all wrong and had to start over.

The image you see on this blog post is the notebook full of my notes, the outline, the characters (or xters as my college creative writing professor used to call them), and even a timeline of the past 45 years so everything makes sense chronologically.

But I’d already written 5,500 words. And I had to start over. The plot didn’t change so I was able to use some of the words I’d already written. I just wanted to change the voice and there were already some inaccuracies that I needed to fix. And, well crap, I’m a perfectionist and it’s really hard to write without editing yourself!

But writing fiction is a lot different than writing a business book. You are completely immersed in your story and time has no bounds.

I looked up Sunday morning and three hours had gone by. Right now I’m writing about something that happens in the middle of the night so I was alarmed to see the sun was shining and people were outside walking down the street with their dogs and kids.

It’s a completely different experience and I wondered, aloud to Mr. D, how I was going to make it the rest of the month.

Then Mitch Joel’s Six Links Worthy of Your Attention arrived in my inbox and, in it, was a New York Times article with some advice from authors.

It was written with advice on avoiding online distractions while you write and it quotes four business book authors and one novelist (David Carr).

Some people turn off the Internet entirely, some going as far as turning off the WiFi.

That wouldn’t work for me because I need the web to fact check, link to other articles, and find inspiration. But I do turn off everything else. And I write while the rest of you are sleeping (which is a lot easier now that Daylight Savings Time has ended).

But what I found most interesting is what David Carr says:

For months, I worked on my book late at night after work, but that will only get you so far. Eventually, I went to a cabin in the woods, yes, that had no Internet. It did have dial-up access, which is like having no Internet at all. Things moved very quickly after that. I sat in a room full of books, read some of them, stared at others, but mostly tried to work on my own. I slept, wrote and ate in the same room. That way, when I woke up, there was only the book; when I went to sleep, there was only the book. I put my notes up in sequence around the room, and when I finished with this action, I would take them off the wall. Eventually, the walls were empty, and the book was done.

I don’t know if I have any dates I can take off in November to finish writing this book, but if I do NaNoWriMo next year or if any of you are participating, it’s not a bad idea to try.

What tips do you have for writing a novel while working full-time?