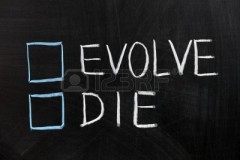 A new study conducted by the CMO Network on Forbes asks nearly 2,000 chief marketers a bunch of questions, including the best ad agency of the year, how important is integrated marketing communication, and how they feel about measurement, the agency model, the pitch, and more.

The chief marketers mostly commented on the relationships they have with the large agencies, particularly those under holding companies.

What’s interesting is their feeling on how well digital is being integrated into the agency model, with some going as far as to say agencies are “acquiring assets, but having difficulty integrating digital capabilities.”

In fact, nearly three quarters believe agencies are not adapting well to the digital age. A typical comment was, “I think they have given up adapting and are laying low. I see very little interest in changing.”

The World Has Changed, But Marketing Has Not

I can’t get past that statement.

But the organizations responsible for communicating with us have very little interest in changing.

In fairness, people spend more than 30 percent of our time online, but nearly all marketers allocate less than 20 percent of their budgets to online communication.

But the bigger issue – and I’ve seen this myself with the exception of one or two global agencies – is they are hiring people with large Twitter followings or big blog readership to build their digital departments, but they’re not welcomed by, integrated with, or even officed near the more traditional departments.

Like their chief marketer peers, they are overwhelmed by the explosion of communication channels available, but have no idea how to integrate, message consistently, or work with other agencies to do what’s best for the client company.

So they add a department that does good work online and call it a day.

Where is the Accountability?

Not only that, agencies are being asked to reduce their fees, work with more than 50 other agencies (in some cases), and prove how their efforts are driving business.

One respondent went so far as to say:

For years agencies weren’t accountable. Now they are and the model is crumbling. Advertising that doesn’t drive business will lead to a quick end to the ad budget and perhaps the agency as well.

The industry, as a whole – both PR and advertising – doesn’t have a uniform way of measuring results.

Because of that, those who can tap into a client’s key performance indicators and prove how their efforts are driving more business, will win.

Agencies Must Evolve or Die

Those who can’t? Well, a respondent voiced a warning:

Agency masthead doesn’t matter. It’s the team of three or four people that makes the difference. Everybody has a hub-and-spoke wheel, everybody has proprietary insights, and everybody has an angle. Who has accountability? It is an industry that is a few short years away from crashing on itself. It is boxing – very shortly a mixed martial arts model is going to come along and, like boxing, ad agencies will largely become irrelevant.

This is good news for boutique agencies that can provide a team of three or four people with specific industry expertise, prove accountability, create metrics that work, and measure results.

You can read about the entire study in, “What Are 10 Great Ad Agencies of 2013, According to CMOs?“