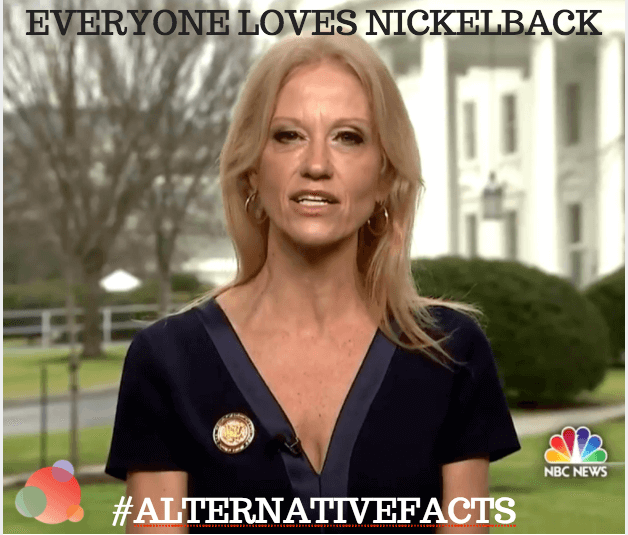 I had a two hour workout at the gym today, followed by a kale salad. #alternativefact

You just made me snort.

Is that a fact or alternative fact?

That’s a fact. The alternative fact is you made me spit wine out my nose.

(Which totally would have been awesome, but it did not happen.)

And here we are…alternative facts has become a household phrase, literally overnight (and that is the correct use of literally).

The good news is it gives us so much fodder for Spin Sucks.

You see, Spin Sucks exists because people like Kellyanne Conway and Sean Spicer spin the truth and end up making the rest of us look bad.

The Spin of Sean Spicer

Here is a quick synopsis of what happened.

Here are the facts:

On Sunday, Kellyanne Conway sparred with Chuck Todd on Meet the Press.

Chuck took her to task about Spicer’s comments, to which she replied:

Don’t be so overly dramatic about it about it, Chuck. You’re saying it’s a falsehood, but our press secretary, Sean Spicer, gave alternative facts about it.

The kind of lies we all got in trouble for telling as kids.

The issue is Trump and his team are masters at deflection.

They have everyone in a tizzy about their lies to deflect from appointments and executive orders.

(Which I’m not going to get into because I don’t want to derail this into a political conversation.)

If they weren’t lying to Americans and using their powers for good, I would be super, super impressed.

I liken this to Pablo Escobar. That guy was freaking brilliant.

I mean, to get around the drug-sniffing dogs, he figured out how to get cocaine into paint.

He coated boats with his cocaine paint and steered them right into the U.S., without repercussion.

It’s super impressive…but evil as all get out.

If only he’d used his powers for good.

Likewise, the deflection of the White House is impressive…if only it were used for good.

The PR industry has always had a perception issue.

We are immediately thought of as spin doctors and liars.

I can vouch for every, single person who reads this blog.

You are not spin doctors or liars.

I am not a spin doctor or a liar.

No one on my team is a spin doctor or a liar.

But Washington and Hollywood have always made us look bad.

We have movies such as Wag the Dog and TV shows such as Sex & the City.

Those make us look bad and it’s always been a real fight to gain real credibility.

And now we have alternative facts.

Commit to Doing These Five Things

So what do we do?

There are several things we can each commit to doing:

What would you add to this list of commitments we can each make?