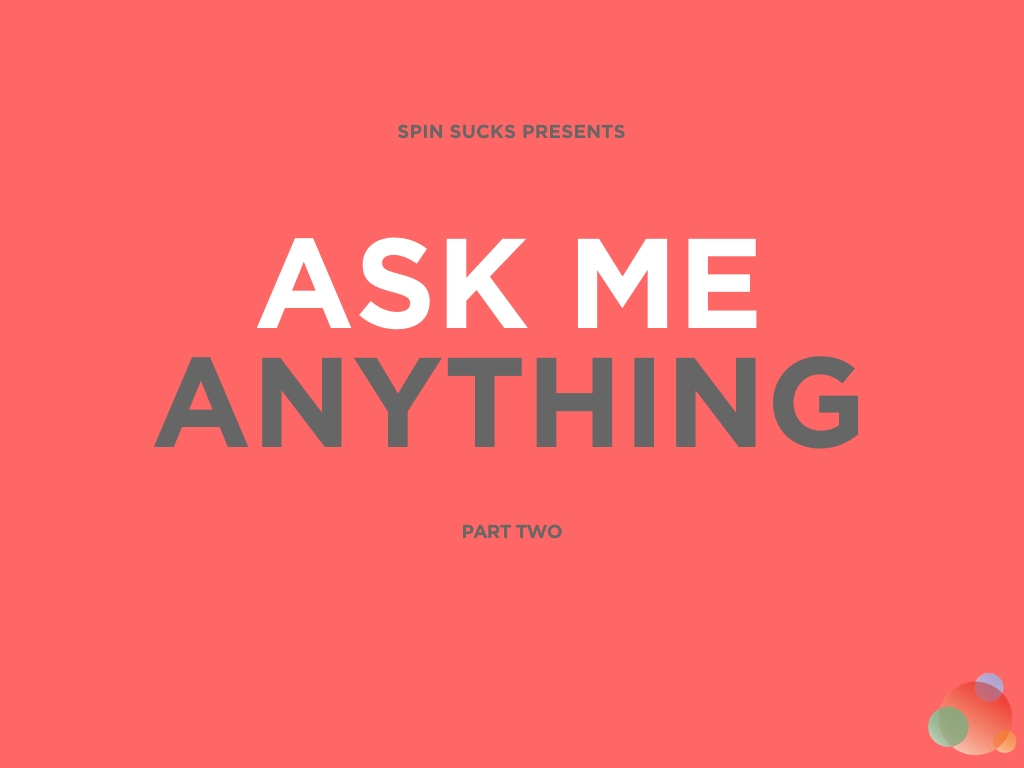 Yesterday, we did a full article on this week’s Spin Sucks podcast episode and the Ask Me Anything feature.

As I reviewed the questions our community submitted, I realized we weren’t able to get to all of them.

We work hard to keep the podcast episodes to 15 minutes or less—and we just ran out of time!

But, as I recommend to our clients—and to all of you—some of your best content is in the questions you are asked.

So this is part two (with answers this time) of the Ask Me Anything feature…in written versus audio format.

Though Shane Carpenter did get a couple of questions answered in this week’s podcast episode, I thought his other two questions were fun and relevant.

What drew you to be a communications professional? What are the biggest misconceptions you find clients have about marketing communication?

I was going to go to law school. I wanted to do contract negotiations for professional athletes. But I also very badly needed a job, if only to pay my way through school.

A friend of mine called and said she had interviewed for an account coordinator job at an agency, but she wasn’t interested in the job. She thought I’d be perfect for it.

So I applied, interviewed, was offered, and accepted the job.

The rest, as they say, is history. And law school never became a reality.

Though I still think I’d be great at contract negotiations for professional athletes.

The second answer is more along the misconceptions they have of communications.

They all think communications is just media relations—and they think getting on the front page of the New York Times will solve all of their problems.

A couple of years ago, two weeks before Christmas, a prospect called me in a panic.

Target had told him, if he didn’t sell out of his product on their shelves by Christmas, they were pulling him from their stores.

He just knew we could get him some publicity and all would be good.

It was sad to have to break it to him that we couldn’t do it that quickly (unless he robbed a bank) and that it was unlikely that solve his problems by Christmas.

That tends to be the biggest misconception most have.

I joke that there must be some secret start-up school that teaches you to find a PR firm and ask for as many articles as one can get in the shortest amount of time.

They all seem to want it.

Working with Contractors and Being Profitable

Kimberly Capwell is working on her financials and making her invoicing and reporting even more sophisticated.

To that end, she asked:

Do you pay contractors hourly or a flat rate per month (to align with fixed client retainers for example)?

We always try to work within the contractor’s hourly rate (because fair is fair), but negotiate the number of hours it’ll take to do certain things.

That always falls within the client’s fixed retainer. If it ends up being more—and the client has requested it—we submit a scope of work change with new estimate.

The idea is to always, always be profitable, no matter who is doing the work.

(Assuming, of course, the work is done well and with fabulous results.)

Focus On the Results…Not the Cost

Speaking of fabulous results, Deirdre Lopian is looking for some counsel on how to help prospects focus on results versus costs.

Everyone knows they need digital marketing, yet the minute you mention the cost they cringe. I understand we create our buy-in for prospects through our value proposition, but how do we truly get prospects to not think about the cost but focus on results?

You’re either going to be totally in on this answer—or think I’m crazy.

Don’t give prices to a prospect until after they’ve hired you.

Have an on-boarding process that requires they pay you for your ideas.

For instance, our process is we won’t work with anyone unless they go through our two-day strategy planning session at the start of the relationship.

A prospect will receive a proposal that outlines our process—and the cost—but they never, ever get a cost for the tactics until after we deliver the plan.

By then, they’re totally bought in and end up spending considerably more money than they would have had we just sent a proposal with ideas and costs.

(And they never ghost us, either.)

Clients Won’t Listen…What Do We Do?

What do you do when clients will not listen to your counsel?

You know what’s perfect about having a process you put every client through and get paid for your thinking and your ideas?

They stop fighting you when you counsel them.

We’ve spent a considerable amount of time trying to figure out why that is.

We think it’s because we spend two full days with everyone—from CEO on down to marketing coordinator.

By the end of that time together, they’re completely bought into our process and into our counsel.

Doing business this way has completely changed our client relationships—and has improved our closing rate, too.

Clients consider us partners, not vendors.

Heck, by the time we’re finished with them, we know more about their business than they do.

What are the three most business-changing decisions you ever made (can be change for the positive or negative)?

This one is tough!

Her second question is:

What part of the sales funnel do you think that content marketing best addresses?

Nothing like throwing me some soft balls, Jill. Thanks, a lot!

I am the queen of content. Every piece of content the experts say you should have, we’ve done or are actively doing.

It does not equate to sales.

It does, however, equate to crazy amounts of awareness and credibility and thought leadership and authority.

So the short answer to the question is: at the top…when people are learning about you and kicking the tires.

Greg Brooks, who got in a few business-related questions for the podcast episode, also asked:

You have a kid. Are you actively training her to bias towards entrepreneurship?

But guess what she thinks I do for a living?

She thinks Kelly goes on vacation (he travels a ton) and I ride my bike.

Sometimes she’ll add in that I talk on the phone, but mostly she thinks I ride my bike.

If only that were the case.

So I think the short answer is: no.

But I would like to think I’m setting a great example for what a strong, independent woman looks like.

Someone who can balance running a business and be there for her when she gets home from school (as long as she moves along quickly so I can finish working).

So maybe someday she’ll look at both of her entrepreneurial parents and have the fire in her belly.

Or, she’ll be a penguin, which is what thinks she’s going to be when she grows up.

When Should a Business Diversify?

Katie Robbert had some really smart questions that are worthy of conversation.

Well, two of the three anyway…you’ll see when you get to the third what I mean.

Her first question was:

Just how agile does a business have to be with it’s strategy and core offerings? Only as an example because it’s straight forward—if you build your business around writing news releases and either a) the market gets flooded with companies, b) AI takes over and does this, c) news releases go away as a communication channel, or d) all of the above—how can you survive that as a company? How important is diversification versus focus?

This is a crazy good question to ask yourself, particularly if you’re building a company (versus working inside one).

So good, in fact, Chip Griffin and I discuss this very thing on this week’s The Agency Leadership podcast.

(Did you know we’re doing that? No? It’s brand new! We’re only on week two…and we talk about everything you need to know/do/plan for/implement when building an agency.)

The example Katie uses is a good one—and so is a tech PR firm.

What if you only did tech during the dot com bubble burst?

It’s likely you went out of business.

The name of the game is to diversify.

You absolutely should focus and niche when you start out, but just like my goal was to add seven revenue streams in seven years, you should diversify your offerings.

That could mean your news release business is one revenue stream. Passive income is another. Book royalties is another. Speaking is another. And so on.

You could have a news release business that then adds social media in its third year and adds content marketing in its fifth year.

Your job—as the business owner—is to find ways to diversify.

Who do you look up to? Who is/are your mentor(s)?

A couple of years ago, I attended a mastermind retreat that was bonkers.

It ended up not being my kind of people or the way I like to do business.

But I did meet Kevin Kermes, the co-founder of Career Attraction, who became my accountability partner, my executive confidant, and my friend.

Between him and my leadership team, I have surrounded myself with the people I look up to—and gain advice and counsel from time and again.

And her third question…I told you!

What IS it like to work with Mike Connell? Is he really as Canadian (polite) as he seems?

He IS as polite as he seems, but he also has been around the Spin Sucks team long enough to hold his own.

(You kind of have to or you’d be eaten alive.)

I probably shouldn’t tell you this, but I believe in transparency…

We use the Kermit flail to describe him because, well, when he gets overwhelmed, he pretty much does this.

Sorry, Mike! We love you!

Join Us for the Next Ask Me Anything

Not to leave anyone behind, and true to form, Christopher S. Penn asked some crazy heady and smart questions.

But I am out of writing time and I do need to get dinner on the table before my aforementioned bestie gets hangry.

So I will be back tomorrow for part three of the Ask Me Anything feature…and it will be all his, all day.

In the meantime, if you’d like to participate in the next Ask Me Anything (and be so kind as to provide me fodder for both the podcast and this here blog), join our community.

It’s lots of fun (even though Mike trounces through there) and you’ll learn lots, too.