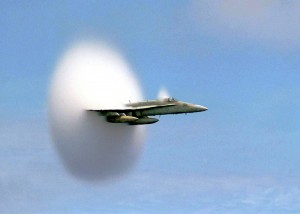 How many of you have ever referred to something historical in a news release?

I know we have. It helps you tell a story about something that might otherwise be boring.

That’s what AT&T (then doing business as Cingular Wireless) did when they issued a news release about their MACH 1 and MACH 2 command centers that allow them to quickly respond to natural disasters so their customers aren’t without service for very long.

They mentioned how Chuck Yeager broke the sound barrier and achieved MACH 1 in a news release that was distributed via PR Newswire. And the General sued them over the use of his name.

See the paragraph below:

Nearly 60 years ago, the legendary test pilot Chuck Yeager broke the sound barrier and achieved Mach 1. Today, Cingular is breaking another kind of barrier with our MACH 1 and MACH 2 mobile command centers, which will enable us to respond rapidly to hurricanes and minimize their impact on our customers.

Seems harmless. It’s in the history books. You can pull the information from Wikipedia. It seems like you should be able to use it without consequence, right?

A jury returned a verdict in favor of Yaeger finding AT&T used his name for the..

Purposes of advertising or selling, or soliciting purchases of, products, merchandise, goods or services, without such person’s prior consent.

AT&T moved for judgement on the case, as a matter of law, stating a news release is, in fact, news and not paid advertising, therefore protected under the First Amendment.

But the district court disagreed and found the news release to be “at least minimally promotional,” and held the company used Yeager’s name as a framing device to sell their new service.

According to Davis & Gilbert, a law firm that specializes in working with communications professionals,

The case illustrates how right of publicity laws are not limited to traditional paid advertisements but, depending on the state, apply more broadly to communications which promote the company or sale of a service or product.

This happened in California, where the laws are more strict than in most states, but it’s a good wake-up call for any of us who create stories, news, or work in public affairs to be careful in how we use a person’s name to tell our story.

When in doubt, get express and written consent from the person whose name, likeness, or image you’d like to use. It’s better to be safe than sorry.