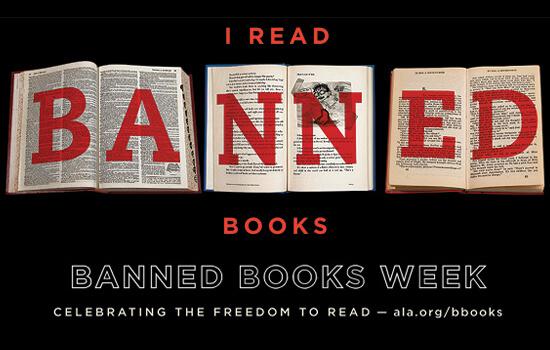 What do Captain Underpants; The Bluest Eye; The Absolutely True Diary of a Part-Time Indian; Fifty Shades of Grey; The Hunger Games; A Bad Boy Can Be Good for a Girl; Looking for Alaska; The Perks of Being a Wallflower; Bless Me, Ultima; and Bone have in common?

Okay, I’ll give you Fifty Shades of Grey… more because I needed to bleach my eyeballs from the horrendous writing than for the nudity…but The Bluest Eye and Hunger Games?

They both were determined to be “unsuited to the age group” that is meant to read them.

This kind of stuff cracks me up in a country that prides itself on the First Amendment.

Sure, there are plenty of books that aren’t age appropriate, but since when is it up to someone else to determine what our kids read? I would have been bored out of my mind in school if I’d stuck with what was age appropriate.

I liken this to my dear middle brother—Jonathan—who ruined cartoons for all of us.

You see, he’d see a cartoon and think he could act it out: Everything from trying to fly off the roof to jumping off a ledge to see what would happen.

My mom banned cartoons in our house…but she didn’t go to the schools and libraries and try to ban them for all kids.

She knew what was appropriate for her children and didn’t try to push that on other people’s kids.

What is Banned Books Week?

Banned Books Week began on Sunday and runs through Saturday (and is an annual event).

What is needed, though, is a concerted effort to support our First Amendment rights to seek and express ideas, even those that are not suited to age groups, contain nudity, or have wars and violence included.

While many of the books I listed above have been—or are—banned, for the majority of them, they remain available.

This happens because people who love to read and support freedom of both reading and writing stand up and support the cause.

There are many things you can do to participate in Banned Books Week:

You also can email this handy, dandy list of the 2013 banned books to yourself as a reminder for those you still need to read.

(It’s a cool new tool a friend has created and I wanted a reason to test it.)

I’m participating and would love for you to join me in the fight against censorship. Support Banned Books Week in a way that makes sense for you.