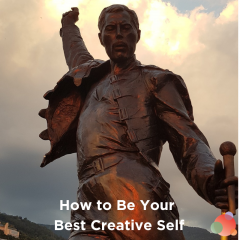 It might very well be the best movie I have ever seen.

It has had a profound effect on me…one I wasn’t expecting.

I mean, how good can a movie about a rock band be?

Sure, it can be good, but to stick with you for days afterwards?

Of course, I love the music of Queen—it’s some of my favorite.

But I was too young to be a Queen fan while Freddie Mercury was alive, so I didn’t really know his story.

And what a story!

He was flamboyant and creative and extraordinarily talented—and very, very lonely.

He did drugs and slept around and ended up contracting AIDS.

One of the best quotes of the movies is:

How do you know when a person has become rotten? Really, really rotten? The fruit flies eat his flesh.

Because his real friends had left him to his vices, he had to fill the loneliness with fruit flies.

People who only cared about his fame and fortune and didn’t care if he slowly killed himself with drugs, alcohol, and sex.

Which got me thinking about creativity and the need to fuel it with addiction.

It’s been said Hemingway once said:

(The truth is, he never did say it—at least not that anyone can actually find—but he did have an argument with Gertrude Stein in A Moveable Feast where he attributed eloquence to drink.)

And nearly every extremely creative and famous person on earth has been said to be drunk or high or stoned when they create.

Think about Stephen King and Steven Tyler and Van Gogh and Prince and Heath Ledger.

They all produced some of their best work while under the influence of something.

So much so, in fact, that GQ recently interviewed eight artists about their vice of choice and sobriety.

When they asked each of them what scared them the most about getting sober, Steven Tyler (lead vocalist of Aerosmith) said:

I thought they were trying to brainwash me. I thought I would lose my creativity.

Am I going to be funny?…Are people going to be attracted to me anymore?…Am I going to be interesting? What’s going to happen to this romantic sort of Hemingway idea I have of my life? Am I going to be tucking my shirt in and getting up at seven o’clock every morning and acting just like everybody else?

It’s a very real fear because addiction has been romanticized when it comes to creativity.

It treats art as whimsical, not serious.

Creating is work, not something silly anybody can do without discipline.

But here we are—nearly every artist on earth believes they will never be as creative sober as they might be drunk.

I’ve often wondered myself if I could finally get my novel written if I had a vice.

Unfortunately for my creativity, staying fit and in shape is far more important than writing the next great American novel.

But don’t think the thought hasn’t crossed my mind. Many, many times.

Art is Not Some Whimsical Thing

As I read more of the GQ interviews—and as I continue to think about Freddie Mercury toward the end of his life—it strikes me that art is not some whimsical thing.

It does take an immense amount of discipline.

I most certainly couldn’t churn out an article every day for this very blog if I were drunk or high or worse.

But there’s always that little voice in the back of your head that thinks what Steven Tyler said out loud:

When you’re high and you create something out of thin air, and the whole world is singing your song that you wrote stoned, it’s hard to think that getting high wasn’t the reason that all that happened.

But then he goes on to say:

All the magic that you thought worked when you were high comes out when you get sober. You realize it was always there, and your fear goes away.

Creativity Must Be Honed

Creativity is something that must be honed.

Sure, you might have crazy ideas that can become something while under the influence—just like you may have a dream that turns into art.

But you have to work at it every, single day.

We all have creativity in our bones.

It could come out through singing or dancing or writing or painting or photography or woodworking or cooking or any other creative endeavor.

Do what you love to do and hone that skill without the influence of something that alters your brain.

But if you keep at it, day after day, not only will you create, you will be satisfied.

Do it first for yourself and then slowly let the world see what you’ve been working on.

It’s easy to sit back and say, “Well so and so did it only because they were high.”

I mean, Jimi Hendrix is arguably one of the best musicians of all time and he was always in outer space—high on heroin.

But Hendrix also died at the age of 27 and left the world short on his creative supply.

Be Your Best Creative Self

So sit down and create.

Keep a notebook by your bedside so you can jot down ideas when you wake up in the middle of the night.

They may not seem as great in daylight as they did in the middle of the night, but they may also spur something else.

We all have the ability and not one of us needs to write drunk and edit sober.

Learn from Freddie Mercury and Jimi Hendrix and Heath Ledger and don’t make those same mistakes.

Work hard at your craft—and do it while sober.

And remember what Jason Isbell said: getting up at 7 a.m., tucking in your shirt, and acting like everyone else is boring.

I’m excited to see what you have in store for your creative self this year.