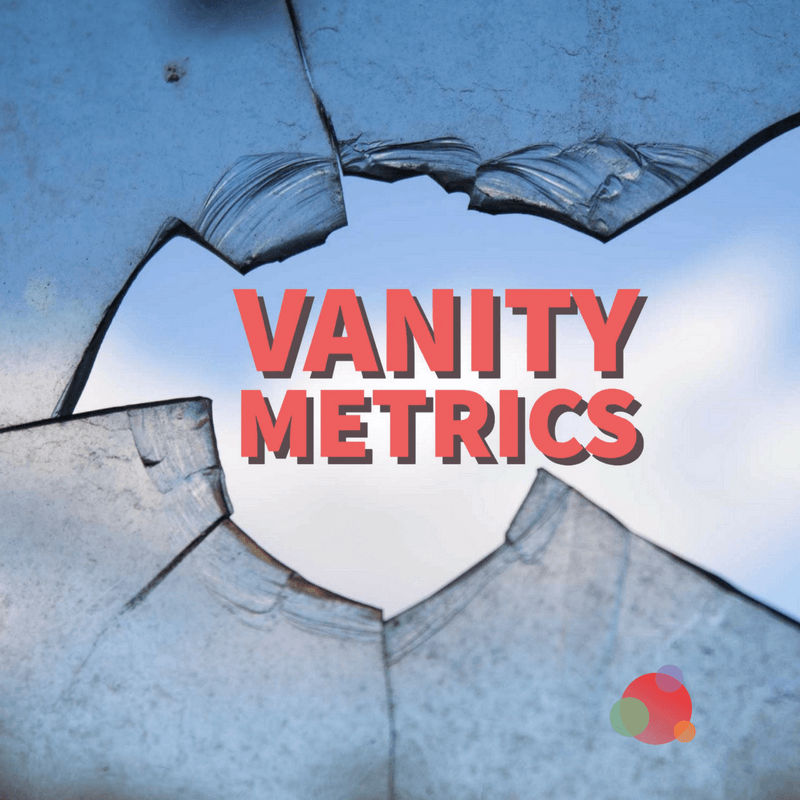 The PR industry is not using vanity metrics such as reach, social media engagement, or even site visits because we don’t know any better.

We know there are better ways to measure things, such as an increase in leads, votes, or sales.

Ask anyone—would they rather tell their client they earned them a million dollars or a million eyeballs?

So what’s stopping us?

It actually has little to do with the lack of knowledge.

Brene Brown recently said something that struck me as a great explanation of why a lot of people struggle with change.

We want to believe that we are thinking, rational people and on occasion tangle with emotion, flick it out of the way, and go back to thinking. The truth is we are emotional beings who on occasion think.

This is why we stick to vanity metrics in spite of industry recommendations—anything more complicated makes us feel stuff we don’t want, such as discomfort or fear.

We grew up in a world where having 10 dollars is better than having five.

Getting 95 percent on a test is better than getting 70 percent.

It’s easy to apply this logic to business and say that 100 media appearances are better than 50.

Thinking any other way requires we dig deeper, learn new tools, and implement change within our own organization.

Why bother when the client will understand the value of likes and AVE?

We justify it by telling ourselves that everyone who does measurement differently has more budget, reasonable clients, or different goals.

But it’s just an excuse.

We do it because it’s emotionally and mentally hard to go beyond the obvious.

I still sometimes avoid opening Google Analytics because I fear what data will tell me.

Then I stop, take a breath, and remind myself of these three things.

If it Sucks, it Sucks Whether You Know About it or Not

At one point, we wanted to get published in mainstream media and our goal was to “raise awareness.”

We landed a recommendation from one of the top websites in the world and expected a huge increase in “awareness” (whatever that means).

We got a grand total of four website visits and zero customers.

A long time ago, I would have been happy to present my boss with the result of “being published on a major website with exposure to more than 50,000 people.”

But is there any value to awareness if only four people were intrigued enough to click?

And this question is just the start.

When you start digging for data, you will inevitably land in a place where you will feel like you all you ever knew about PR is wrong.

But you will benefit from it in the long run.

When given a simple two plus two calculation, a computer will not respond with “well, my guess, given previous experience and industry benchmarks, is that it may be somewhere around four.”

Yet people do this all the time.

When we started measuring, it turned out some activities were not generating any results.

Coincidentally, most of them were tasks that were taking up a lot of our time and energy.

When you have data supporting your claim that it’s better to send out a news release when you have actual news than to spam journalists every week, you’ll free up your staff’s time.

They’ll be happier and more productive.

You are also wrong if you’re thinking “yes, but the client demands these vanity metrics, so I have to deliver.”

The truth is that clients demand a lot, but in the end, they want you to be a consultant, not a typing machine.

In spite of everything they say, they will drop you in a matter of seconds when somebody comes along and demonstrates results that go beyond just reach and social media shares.

Recently I was at an awards pitch where two agencies presented the results of their recent political campaign.

The other agency said nothing about coverage.

They simply said their candidate won, and then talked about how their communications strategy made it happen.

If those two agencies ever pitch the same client, which one do you think will get the contract?

Ditching the PR vanity metrics is difficult, but it pays off in the long run.

If you have tips you’d like to share for how you made the leap, let me know in the comments.

Iva is a PR & Marketing Manager for Mediatoolkit, an online media monitoring and analytics tool. She used to work for a fast-paced PR agency, now she is just pacing around her office and trying to figure out how to help PR people become better at measurement.

View all posts by Iva Glavinic