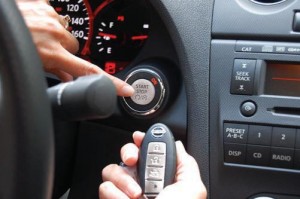 Alright. I know this isn’t a typical blog post for me. But I need some help. And I thought, “Who better to ask than the blog readers?”

I was in Atlanta last week. I rented a nice little Nissan Altima. It was a hybrid car. I liked it. But I’m having a problem with the car keys and I can’t get past it.

The car doesn’t have a place for you to hang your keys. You tap the on/off button with the tip of the key, put your foot on the brake, and push the button. The car starts. And you throw your keys in the cupholder.

First time I thought, “Okay. I can deal with this. If I have to use the keys to turn off the car, I won’t leave them in the cupholder.”

You don’t have to tap the button to turn off the car. You just push the button and off it goes! Yes, you do have to have the keys in order to lock the doors, but most human beings (at some point) will get out of the car in a hurry and rush off without realizing they don’t have their keys and didn’t lock their door.

Are automakers trying to get us to change our habits, in an effort to become more secure? Or am I totally missing the point?