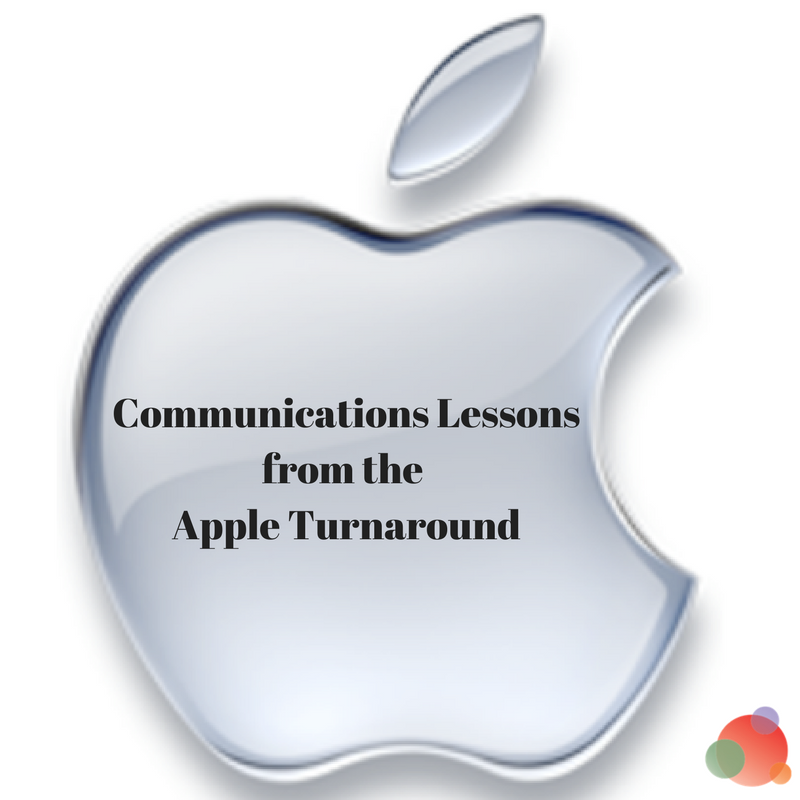 It’s hard to believe now, but when I first began working with Apple in 1997, the company was in shambles.

Steve Jobs had just returned, but the organization he’d founded on innovation and delight was a shadow of its former self.

It had a bloated product mix and many launches had failed…miserably.

It had flops such as the Macintosh TV, the Newton, and the Macintosh Portable, a briefcase size “laptop” that retailed for the equivalent of 11 thousand dollars and weighed 16 pounds.

There were bad reviews, tanking stock prices, sagging market share, and, of course, the headlines:

Rotten to the Core

I had always loved Apple, but it was like watching your favorite band make a string of bad albums.

You still buy them out of loyalty, but you hope and pray that one day the band will find their mojo again and make great music.

The Communications Lessons from the Apple Turnaround

Little did I know that during the next 10 years, I’d be part of the biggest corporate turnaround in global history.

I started working with Apple on the PR agency side in 1997 in Australia right after Steve had returned.

From there, I moved to Singapore, where I led communications for Apple in the Asia Pacific region.

A few years later, I moved to the mothership in Cupertino, working as a senior member of the Apple PR team.

It’s a story we know well.

Apple did many things right, not least of which was to bring back Steve himself and return to their roots of innovation and delight.

But in all that, do not underestimate the important role communications played, too.

In fact, the communications lessons I learned at Apple, along with the lessons from the rest of my career at brands such as Visa, eBay, PayPal, and Yahoo! all revolve around five principles.

I’m going to share these principles in two sessions at the PRSA International Conference in Boston next week.

Until then, here’s a sneak peak.

Take a look back at any Apple news release from the Steve Jobs years and you will see short words, short sentences and plenty of emotion.

1,000 Songs in Your Pocket. With iPod, listening to music will never be the same again.

Any hint of jargon, cliché, or techno mumbo-jumbo is absent.

If a “mere mortal,” as Steve liked to say, couldn’t understand our language, then we had failed.

And failure was not an option.

The easier your communications are to understand, the broader the reach and the more effective the message.

This is particularly important in today’s global world where English is not everyone’s first language.

Prioritize Influencers and Respect Their Time

Today, there are fewer journalists and fewer media outlets, with more companies jockeying for media coverage than ever before.

If you follow closely how the Apple communications team works, you will see they only reserve news releases for important announcements.

They don’t bombard the media with a release for every software update or hire of a mid-level manager.

Follow Apple’s lead: do not overplay your hand or they will stop listening.

When I revealed in Harvard Business Review that Steve read and approved every news release, many of my communications peers were shocked.

But why is it so odd for a CEO to read and approve news releases?

Communications is up there alongside reading a sales spreadsheet as a key responsibility of any successful company leader.

It reveals news about the organization in a succinct manner.

Every executive should make time to read these documents.

During the turnaround, we had one mission: to tell the story of how our innovative products were giving customers the tools to unleash their creativity and change the world.

On any given day we’d have a host of incoming requests asking for spokespeople to chime in on industry trends, politics, personnel, and countless other subjects.

But if the request didn’t fit in with our mission, we politely declined to participate.

It drove journalists nuts, but it was an approach that helped us use our time and energy most efficiently.

Steve wore the title of “influencer” before it even existed.

It’s tempting to think that sort of crowd command is out of reach for us mere mortals.

You too can bring out your company’s story or your own story—the magic of what you do, what separates you from everyone else—and become the influencer.

Over time, people will seek you out for commentary and opportunities rather than the other way around.

It may seem like these communications lessons are out of reach.

I am, after all, speaking about Steve Jobs and one of the most famous turnarounds of all time.

But they work for every organization that has leaders who are willing to do the hard work.

If you can’t wait until the PRSA International Conference—or aren’t attending—to explore these five principles further, you can read more on A Signature Story.

But I promise some surprises, communications lessons, and perhaps “one more thing” for everyone who attends my sessions.

If you’re on the fence about attending, now is the time to commit and come to Boston.

It begins in five days!

Cameron Craig is a communications professional with more than 20 years of experience working with Apple, Visa, PayPal, Polycom and Yahoo! Formerly, he was a tour publicist for Johnny Cash.

View all posts by Cameron Craig