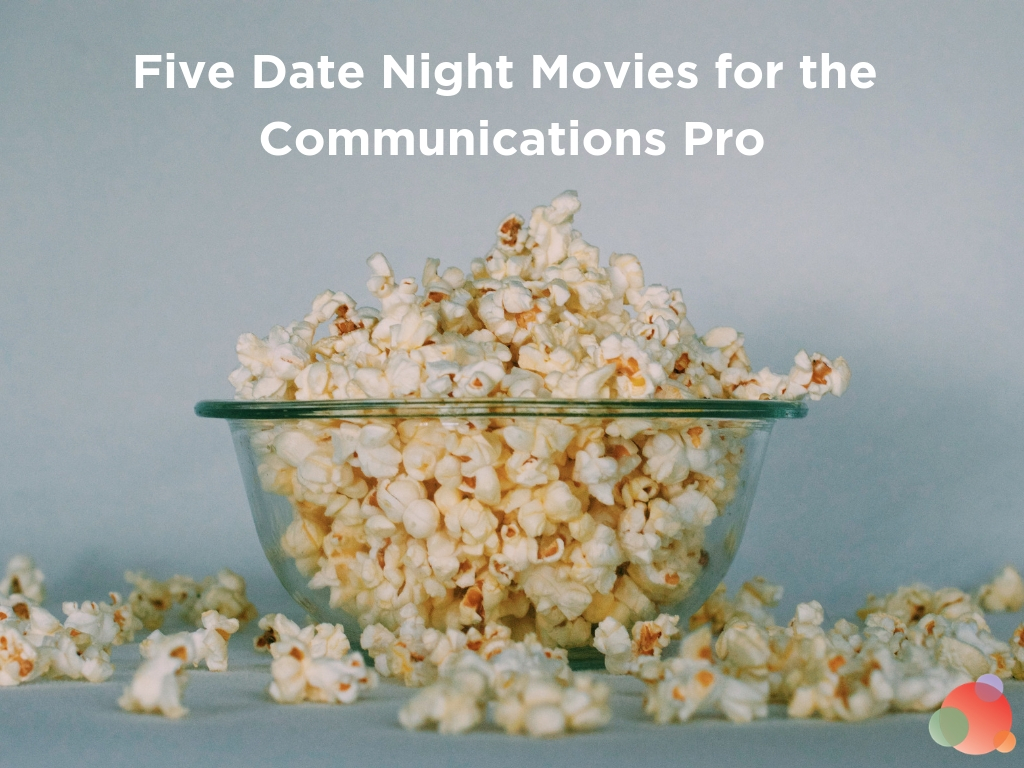 The way communications pros are portrayed in Hollywood movies is often hit or miss.

Communicators can be lovable (or not so lovable) publicists, conniving manipulators, or journalists who always do the right thing.

In fact, it seems like the only reason magazines exist in a film is to provide a cool job for rom-com leads.

That’s why, on the most lovey-dovey day of the year, when couples are searching for the perfect night in, we thought what’s better than treating your date to a romantic dinner and a movie about communications?

You know, to help them get what we do—and us.

I mean, relationships are all about understanding, right??

So pop the popcorn, and settle into one of our five choices, that pull open the covers on the life of a communications pro.

The Social Network, which summarizes the Zuck’s controversial rise to the top, is a great choice if you want to have an evening of drama.

It’s also a great reminder that some people don’t get to the top without stepping on a few (former) friends.

But what can we, as communicators, take away?

First, don’t get on Zuckerberg’s bad side.

Second, this movie shows us how the how far Facebook has come since its humble beginnings.

With so much marketing being done on social media, it’s important to remember where it all started.

What was once a a hook up site designed for college students, is now one of the most powerful marketing platforms on the planet.

Do they think Facebook is vital to marketing plans these days?

Are the relationships you build there organic…or paid?

And then, you can move in for the big one: do they want to be your friend on Facebook?

See? We told you it was drama time!

All the President’s Men

If you love a good classic movie you can’t go wrong with All the President’s Men.

Not only does it star Robert Redford (hubba, hubba) and Dustin Hoffman, but it offers a more realistic view into what journalism was like in the ‘70s.

I watched it last weekend and all I kept thinking was, “How did they turn out so much copy without cut and paste?”

Working in the world of communications today is whole different ball game, and one I’d venture to say we take for granted.

The internet has made things immeasurably easier.

How often do we have to physically track down leads or sources for a story?

If we don’t know something, we turn to the internet at our desk and not the library down the street.

We have to constantly keep up with the ever changing landscape of what trends are in, and what’s out, and constantly adapt. Just because we have access to the internet doesn’t mean working in communications is a cake-walk.

And just like the ‘70s, knowing the credibility of your sources, and checking facts is key.

If you ever want to feel a little more appreciation about the job you do, watch the story of two of the most renowned journalists of our time struggle to uncover the Watergate scandal.

Then ask your date if they ever had a cover up…

Looking for more of a black comedy that exposes the darker side of communications?

Wag the Dog might be just what the (spin) doctor ordered.

We’re pretty open about our hatred for spin around here because of the dishonesty and misinformation it grows from, but in this case, we’ll let it slide for entertainment value.

Robert DeNiro and Dustin Hoffman (is there a communications pattern here??) star as a spin doctor and movie producer tasked with hiding away a recent scandal involving an underage girl and the president.

They concoct a made up tale that spreads like wildfire and then takes on a life of its own.

It’s a good reminder that alternate facts and false news have been around for a long time. But as we all know, social media spreads them faster and farther.

The moral of this story? Spin Sucks.

It brings up a lot of questions about honesty, ethics, and trust.

And is a subtle reminder not to let your budding romance spin out of control!

Throw in a lovecrossed couple, her jealous new lover, a movie studio betting on a big release, a reluctant publicist, and a bunch of reporters trying to get the scoop on whether the couple, who also happen to be the stars of said movie, are a thing again.

America’s Sweethearts stars Catherine Zeta-Jones and John Cusack, as the celebs, Julia Roberts as Zeta-Jones’ sister and assistant, and Billy Crystal, as the PR guy who has to put out a lot of fires, and face the media again and again.

Crystal delivers his share of one-liners, and in the end love does prevail.

(Hey, this is a Valentine’s Day article, isn’t it?)

It’s a great example of communications pro as event planner, media trainer, relationship-builder, and all round problem-solver.

In other words, the ultimate multi-tasker. Just the talents you need to balance job, life, and budding new relationship.

Just don’t get too full of yourself. Nobody likes a braggart.

And don’t judge me and my love for Jerry Maguire.

As folks who engage with clients on a daily basis, I think there’s a ton we can take away from this movie.

Granted, Jerry is a sports agent, but there was a time we might have been called press agents so the similarities are there!

Jerry’s tired of working for a firm that doesn’t value his clients.

He wants to be more honest and develop closer relationships with them instead of simply viewing them as dollar signs.

He writes a fantastic mission statement, delivers it, and his ultimatum, in legendary status.

Yet when he makes his big exit, no one leaves with him except one assistant, single mom Dorothy.

You know why we like him so much? Jerry gives us someone to root for.

Is he perfect? Nope. (But he comes reeeeally close in my eyes right here.)

Does he want what all good communicators should want? Absolutely.

So, while you snuggle up to your date after the movie, and their eyeballs have been replaced with hearts because of Jerry and Dorothy’s romance, remember that in every relationship there are good times and bad.

And it takes passion, commitment to ride out the rough patches, and honesty to make things turn out in the end.

Love them or hate them, these movies all offer a glimpse into what Hollywood thinks communicators do.

And while they don’t always paint the right picture, there’s lots we can take away.

So grab some Twizzlers and popcorn and get ready to wow your date with all your communications know-how. I bet they’re impressed.

What movies would you add? Did I leave any must-have communications movies out? Tell me here in the comments or shout at me in our super cool Spin Sucks community!

Photo by Georgia Vagim on Unsplash