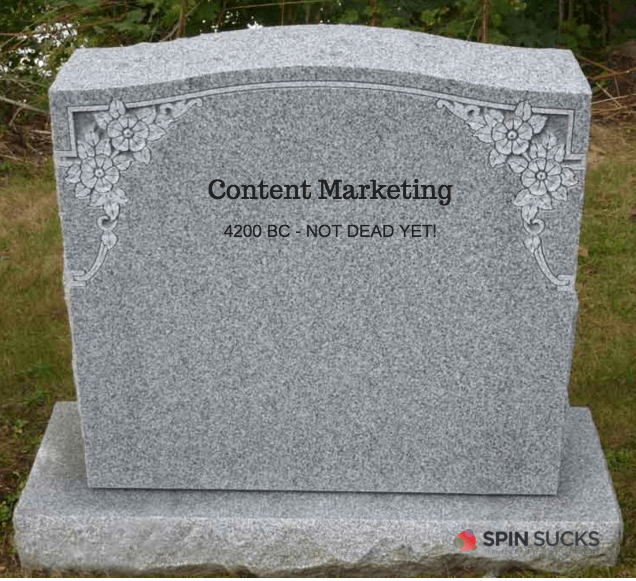 Yesterday, I was recording a podcast with David Reimherr (which, at the end, we argue about Making a Murderer so stay tuned!) and I told the story of how, when I graduated from college and went into PR, my dad said something along the lines of, “I can’t believe you’re not going to be a writer.”

Fast forward to today and let’s just say I figured out how to take that passion and turn it into not only a career, but a business.

And, not only have I figured out how to make it a business, but a pretty, darn good one. Content has become the center of pretty much everything we do.

Heck, this very blog is a great example. Who would have thought, just 10 years ago, we would live in a world where bloggers could write about the things they love and make money doing it, too?

That was reserved for the journalists and everyone else had to rely on them.

No longer! It’s a beautiful, beautiful world in which we live.

Where We Are in the Hype Cycle

This does give great fodder for people brushing it aside and saying it doesn’t work. I mean, it decreased by eight percent! But, let’s be real, only 38 percent saying it’s effective to begin with is still a failing grade.

Yes, I agree we are overly saturated. I agree a good majority of the content isn’t good. But that doesn’t mean it’s dead or doesn’t work. It doesn’t even mean no one is paying attention.

It means we must do better.

In Joe Pulizzi’s editorial for the December issue of Chief Content Officer, he shows the five-step hype cycle that shows the adoption curve of any disruptive technology. 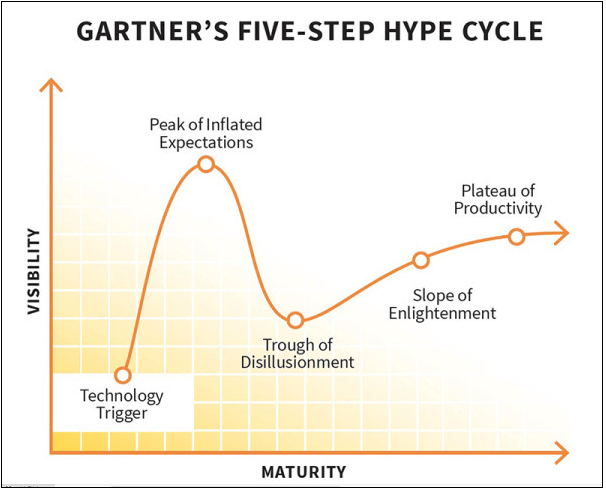 Before last year, we were at the “peak of inflated expectations” level and, starting around the time Mark Schaefer wrote about content shock 18 months ago, we began to hit the “trough of disillusionment,” which is where I believe we still sit.

But you can see we’ll be coming out of that soon to the “slope of enlightenment” and then to “productivity.”

It always makes me laugh to hear marketers and executives complain about all the junk in their inboxes, in their RSS feeds, in their Flipboard accounts, and on the web, in general, but when they get behind their computer screens at work they contribute to the gross mess.

They buy lists and spam via email. They only talk about themselves and their latest sale or their latest hire or their latest award. Their content is dull and has no personality. They quote industry experts, but never offer an opinion of their own. They’re scared to put anything out there because it might mean their competitors will copy them.

And so we sit in the trough of disillusionment, wondering if all this time and all of those resources around content marketing were worth it.

Sure, that kind of content marketing doesn’t work because NO ONE CARES.

Think about the kind of content you read or watch or listen to and can’t get enough of.

Let’s take the aforementioned Making a Murderer (to the two of you who don’t have Netflix, you can watch it for free online with a free month’s subscription…chop, chop!).

Tony Gnau wrote a great piece here, not about the show, but about how the video work, the production style, and the storytelling got much, much better with every episode.

If you’ve seen the show, you likely remember the first episode where people were walking into the camera, the shots weren’t set up at all, the lighting was horrendous, and it made you a little motion sick to watch.

The Slope of Enlightenment is Coming

Every September, I republish our very first blog post both to remind myself how far we’ve come (I’m really bad at stopping to smell the roses) and to show all of you that overnight success takes years and years of honing your craft.

It’s not pretty. In fact, I’m embarrassed just thinking about it.

It’s almost as embarrassing as getting your Facebook memories or Timehop mentions from seven years ago when we still spoke about ourselves in third person.

I roll my eyes nearly every day at how bad it was.

But we got better. Though I wouldn’t call posting on Facebook a craft, with practice, we all figured out how to use it (and how not to use it).

We will hit the slope of enlightenment with content marketing and it’s coming soon.

Be in that 30 percent of organizations that content marketing works for because you’ve honed your craft, you’ve put yourself out there, you’ve told a story people care about, and you didn’t give up.