Before that, the industry was working with a definition that was 40 years old.

Social media has turned the industry on its head.

And technology is changing more quickly than ever before.

It took the following technologies to reach 50 million users:

Technology Changing the Job of the PR Pro

Technology is creating amazing opportunities for us, but also causing some distress. PR professionals now have to add into their skills sets things such as web development, mobile marketing, search, and optimized content.

The web, it turns out, is extremely important in the job of a PR professional. Much more important today than it was even three years ago, as new technologies are introduced and companies are struggling to figure out how to add the latest and greatest to its overall marketing strategy.

It used to be your website was an online version of your corporate brochure. But times, they are a changin’. Your website now needs to be  a living and breathing thing that changes consistently (at least once a week, according to a Hubspot and MarketingProfs study) and becomes less about you and more about your customer.

I like to tell business leaders, when I speak, to take the French out of their sites – the we, we, we.

On top of creating a web presence that has the WIIFM – what’s in it for me – for customers and prospects, we now also have paid media (advertising), earned media (media relations), and owned media, which is the content you produce and distribute.

Owned media is great because, if you can write in an engaging and conversational way, while adding value, you no longer have to solely depend on media buys and influencers and journalists to tell your story for you. You can do it yourself.

The Convergence of Media

The Altimeter Group just released “The Converged Media Imperative: How Brands Must Combine Paid, Owned and Earned Media,” which talks about how all three not only integrate, but how the affect the role of the PR professional. 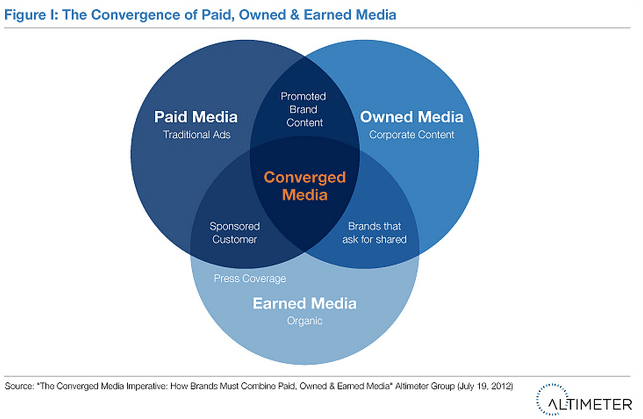 The premise behind this research is the same that Geoff Livingston and I discuss in Marketing in the Round. They say:

Consumers distinguish less and less between paid, owned, and earned media, yet marketers remain specialized in one medium at the expense of the others. Rather than allow campaigns to be driven by paid media, marketers must now develop scale and expertise in owned and earned media to drive effectiveness, cultivate creative ideas, assess customer needs, cultivate influencers, develop reach, achieve authenticity, and cut through clutter.

Convergence is the Name of the Game

The marketing round is described as having someone in the middle of the hub who understands how all of the disciplines work together. This could be a chief marketing officer, a community manager, a communications professional, or even the janitor. It doesn’t matter who it is, as long as the person knows enough about each discipline to know when, and how, to bring each in for most effectiveness.

The disciplines then work together, in a round, in an integrated fashion, creating an opportunity to add in owned and earned media with advertising. 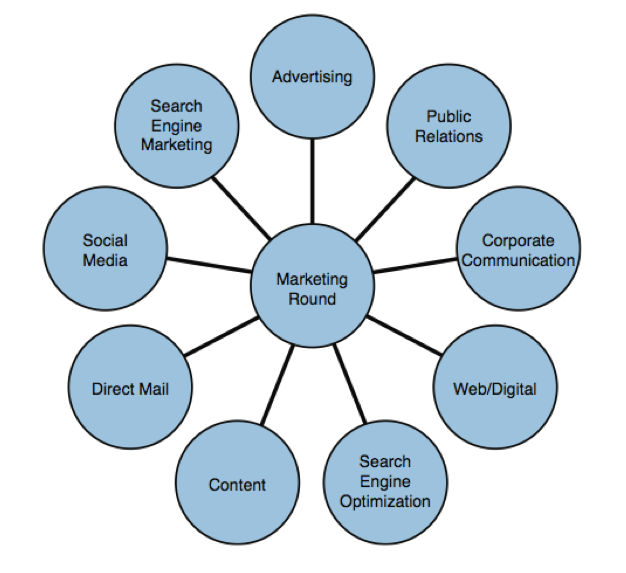 We no longer have the luxury to focus solely on one discipline. The PR pros of tomorrow will know how to program, how to write, how to tell stories, how to stay ahead of the trends, how to create policy, how to organize all company communications, and how to measure efforts, as they relate to business goals.

What are you doing to increase your skills so you’re ready to adapt and converge?