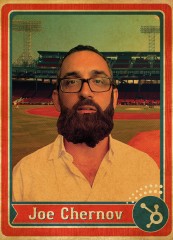 We’ve all been there.

Your company has big news to announce, and you want to share it with the world.

The news is significant for your business, but it’s not likely to make front page news on its own.

You could beg and plead with a reporter who has covered you before or write a traditional news release and pray to the PR gods that a combination of social promotion and “wing and a prayer” pitching will help get the news out.

You could light candles, buy a lottery ticket, and hope for a stroke of good luck, or you can consider an alternative: Friends don’t let friends write boring news releases about office moves, new hires, or a minor product update.

I speak from recent experience on this issue.

Joe is one of the original godfathers of content marketing and a supremely awesome addition to the team. However, as Joe himself noted, “It’s not like Microsoft hiring a new CEO,” so aiming for the front page of the Wall Street Journal just wasn’t realistic.

To that end, we decided to have a little fun with the announcement, using Joe’s legendary beard and the infamy of the bearded heroes of this year’s Red Sox team to announce his arrival with a Hubspot-themed baseball card.

The card drew significant engagement on social media and the company news blog post with the announcement saw the most comments and highest pageviews of any piece of company news posted in the last 12 months.

Facing a similar challenge where you’re going head to head with a global market leader or trying to grow mindshare with a partnership announcement?

Consider the following tips to get more mileage with your news release.

Simply put, visual content performs better on social media and helps your content stick out in the inboxes or Twitter streams of journalists and influencers alike.

When reporters receive and view hundreds of news releases and advisories each day, many with the exact same claims and structure, creative images and illustrations can deliver your message in a clear, concise way that is more likely to get shared by your customers, partners, and target reporters.

Have a Sense of Humor

Self-deprecating humor works as well in news releases as it does as cocktail parties: Everyone is drawn to people who can laugh at themselves.

The common misconception is that only small companies can leverage this strategy successfully, but that’s not so.

CBS got in on the fun, released a fake news announcement in the midst of a heated legal battle with ABC. For reporters mired in subpoenas, legal files, and court documents, you better believe that seeing CBS have a little fun at their own expense and that of a competitor was a welcome break in the action.

The announcement got significant engagement on Twitter and was covered on Huffington Post and Business Insider among others.

If you can’t win in court, a little humor in the court of public opinion can go a long way.

Create for Your Customers

In thinking about an announcement, it’s very easy to get caught up in jargon you think journalists want to hear. Instead, it’s helpful to remind ourselves of David Meerman Scott’s edict to, “Think, speak, and write like your customers do.”

The Beutler Ink collaboration with JP CrossFit coincided with the timing for the CrossFit Games here in Boston. They thought about what people who have heard about CrossFit but don’t understand what the heck it is and built their announcement specifically to address their questions. The infographic not only arms potential customers with the information they need for the games, but also familiarized them with the vocabulary of CrossFit.

The next time you’re staring at a blank page considering how to make a feature update, legal proceeding, patent, or new investor announcement stand out from the pack, think differently.

Develop content humans (whether they are journalists, influencers, customers, or leads) are likely to interact with and share: doing so will effectively prioritize the quality of the content over a boring recap of the details.

The resulting content will show your core audiences you respect their time and interest, demonstrate that you understand how to effectively market your own news, and most importantly, deliver significantly more impact than a boring old news release. Trust us: Your employees, customers, media contacts, and leads will thank you for it.

Katie Burke is a senior manager on HubSpot's marketing team, overseeing media and analyst relations, external events, and sponsorships. Prior to joining HubSpot, she ran marketing for Athletes' Performance and worked as a director for the Glover Park Group, a strategic communications consultancy. Katie has her MBA from MIT's Sloan School of Management and attended Bates College in Maine.

View all posts by Katie Burke