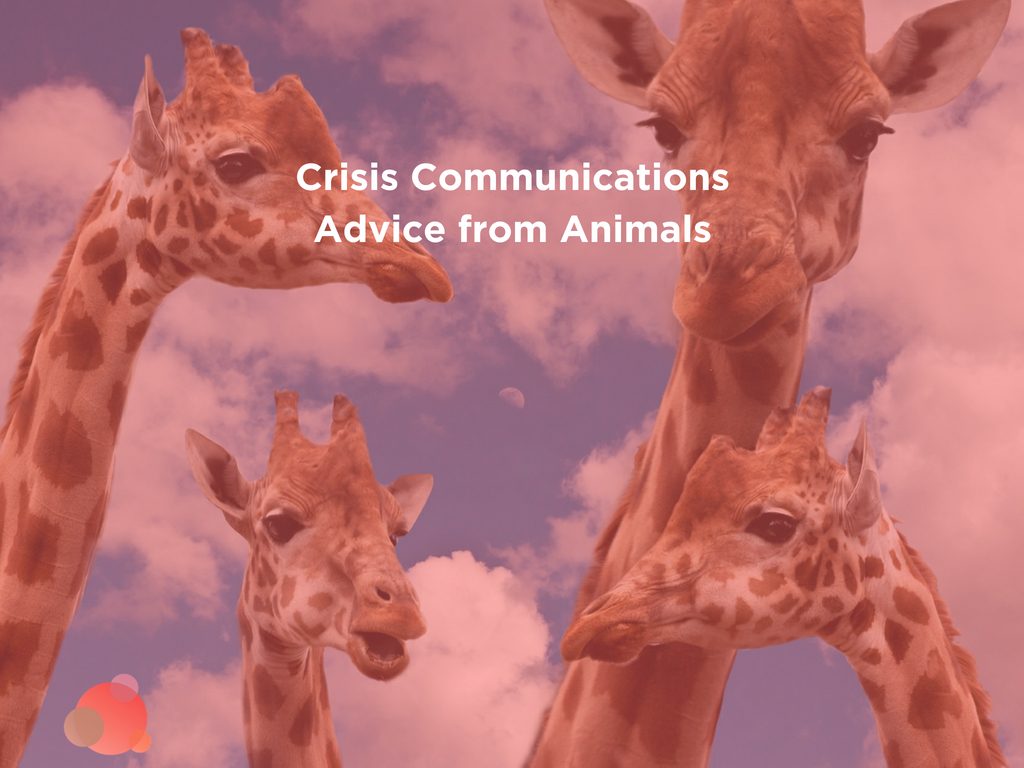 Crisis communications is an art and a science.

You need to have a plan in place, be proactive, and follow a predetermined process to rank and respond to issues and crisis events.

But you also need to be agile. Know when to adjust, when and how to respond, and understand how to mold your pre-made plan to the needs of the current, unique crisis.

Because every crisis is unique.

And while we now have a lot of tools to monitor and track, notify and engage…these things help us in the science part of crisis communications, but often leave us blank when it comes to the art.

We end up either not following our instincts enough, or following them too much.

So when it comes to instincts, there is no better place to look than animals?

While we might fight with Facebook trolls and fake news, animals rely on communications to deal with life and death threats daily.

Animals have spent an eternity developing and refining signaling and communications methods to transmit their messages without the aid of modern technology?

How do they do it? Let’s look at a few examples!

One “bark” will not only alert the rest of the “Dawg Crew” (gang name assumed by me) that a certain type of predator is coming, but the exact details of that predator.

Instead of saying, “A human is coming,” they say, “A tall, skinny human with brown hair and freckles, wearing jeans, a New Kids on the Block t-shirt, and some very unfortunate orange Crocs to is coming towards us from the east at around 10 miles per hour.”

So, what can you learn about from a prairie dog when it comes to crisis communications?

It’s not enough to know there is a problem. You must understand the problem in detail and then translate it clearly to your entire team.

You can’t fix an issue if you don’t fully understand every element. Nor can a team be consistent and decide on the best crisis communications strategy if it’s based on shaky facts.

Break down the issues in detail—who, what, when, why, and timeline of issues and needs. Then, communicate these details and associated plan to the rest of the team.

Make sure everyone is crystal clear on goals and how to monitor and measure progress.

It’s best to do this verbally and through a visual outline or representation of some sort. Be available to answer questions. In fact, require that your team asks questions.

And then have everyone explain their part of the plan back to you.

It’s a scientific fact that people (no prairie dogs) don’t actually understand something until they can say it back to you (or teach someone else). And the act of saying it back to you helps engage their prefrontal cortex so they understand and remember what was said.

Bees use many forms of chemical signaling to indicate needs and crisis.

For example, when a bee stings a predator (or perceived predator), the chemical released into the sting serves both to wound its enemy and alert other bees of danger.

This is why “killer bees” are, well, “killer.” They are very sensitive to this warning pheromone and so the entire swarm will come to alert and sting the enemy until they die (sounds kind of like a social media troll swarm, huh?).

Now, I’m not suggesting here that your team swarm at threats and attack until the enemy is dead. But we can take cues from bees in making sure our entire organization is aware of a crisis at hand before “the enemy” strikes.

Oftentimes, by the time the entire organization (or even the communications team) is aware of the crisis, it’s too late.

This happens as a result of organizational silos or leaders who are afraid to admit (or acknowledge) problems.

Many times employees will find out about the crisis from the media prior to learning about it internally.

Gini Dietrich spoke to a case like that a few months ago.

You can imagine what that does for an organization’s culture. And at a time when the team should be pulling together, they are fractured.

This is bad news for successful crisis communications.

Instead, have a plan of action for how the communication will flow through the internal organization before a crisis strikes.

Know exactly who will communicate with whom and at what levels within the organization certain information will be shared.

Think of this like how you used to have fire, hurricane, or earthquake drills in elementary school. Everyone had a plan and understood where to go when and how communications and action would flow.

The same needs to hold true for your business.

Everything won’t follow the plan exactly (that’s what makes crisis communications fun, right?). An outlined strategy helps to cut through the chaos and make sure internal communications flow more smoothly.

Diane monkeys not only have a detailed communication system of their own, they also understand the language of other species of monkey that live near them.

This helps them reach out beyond their own world and understand what’s going on from a broader and more varied viewpoint.

One of the key aspects of successful crisis communications is the ability to see all sides of the situation.

Act like a monkey and take time to learn about all of your buyer personas and stakeholders ahead of time. Understand motivations, feelings, worldviews, and some of the trigger issues for each one.

Also make sure you have a strong grasp on specific language and communications methods which are most effective. Every community has their own language and unwriten rules. These are extremely important to understand. All the time, but especially during a crisis.

Hint: This will also prevent you from getting into a crisis situation in the first place.

While animals have a lot figured out, they are still completely stumped when it comes to fake news. Just like us, they struggle to distinguish real from fake, especially when in an environment where they feel uncertain.

Since that’s something we all need to work on, it’s the topic of next week’s article. (Since I like to write for every species’ communications needs.)

Most animals might not know how to tweet, actively promote themselves on Facebook (emphasis on “most.” I know a lot of animals who probably do social media better than you ). They might not stop mid-hunt to Instagram a selfie (unless they are this monkey). But they are incredibly talented at communicating in a way that supports and protects them and their community.

They have developed modes of communications in crisis that are smart and nimble. And they’ve tested their effectiveness through a fairly rigorous and risky method: Survival.