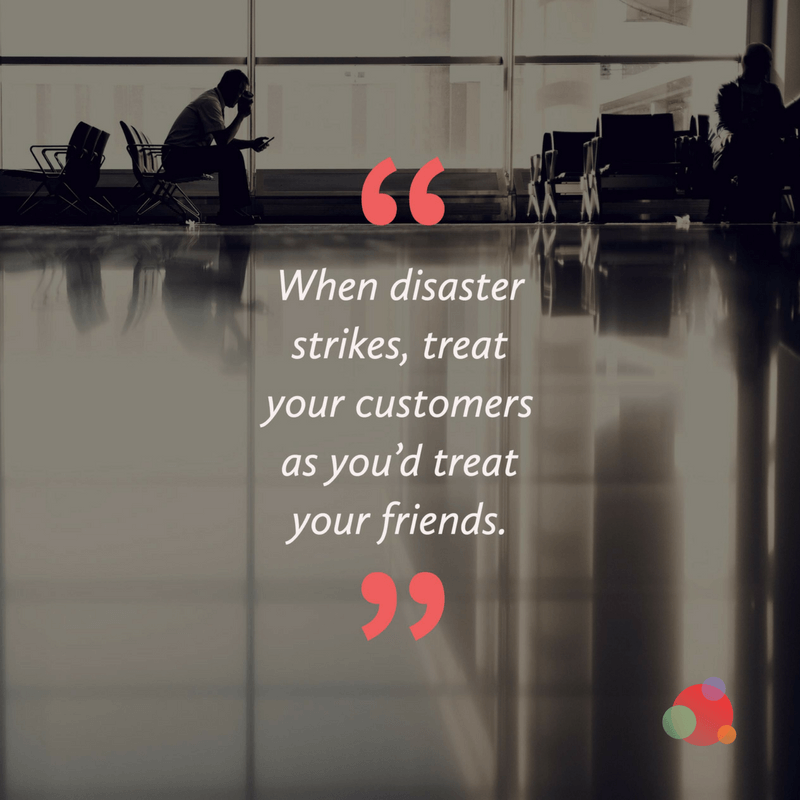 Ignited and exacerbated by the fuel of social media, it was nothing short of a crisis communications nightmare.

But it also means public scrutiny of brands is a mere finger-swipe away.

An isolated incident can spread like wildfire and easily become a front-page story in no time.

Of course, mobile technology’s instant communication abilities can work to a brand’s advantage, too.

Do something good, and your word-of-mouth score will rocket.

But mess up, and the social media fallout can drag your reputation down in a matter of hours.

Social Media: The Crisis Communications Curse and the Cure

Brands that take social media seriously as a crisis communications channel are able to better control the conversation surrounding a mistake and avoid a large-scale scandal.

Having an effective strategy in place can mean the difference between rapid recovery and turning customers off for life.

Delta, for instance, took to Twitter to deliver moment-by-moment updates that included a video apology from CEO, Ed Bastian.

The airline’s decision to lead the media response before it could be controlled by outside forces was a smart one.

Of course, there were customers who still suffered and used their own social media accounts to make Delta aware of it (not to mention all of their followers).

But with a unified team and personal, quick responses, Delta managed to assuage angry customers, recovering from what could have been a fatal mishap.

While crisis communications isn’t certain, it is a risk all businesses face.

Here’s how to effectively de-escalate and weather the storm through effective communication.

To turn crisis into kudos, your brand needs to display a unified front.

Instead of putting up defenses or offering excuses, resolve to always respond in a dignified, human manner.

No matter the problem at hand.

To do this, you’ll need to build a solid response team.

Train the team thoroughly and arm them with a set of responses to use and actions to take in various scenarios.

Empower the team to provide authentic assistance and spontaneous acts of kindness.

No problem is ever solved by avoidance.

If you’ve made a mistake, own up to it, and get on with making it better.

In turn, they’ll be more likely to trust and respect you in the future.

After Applebee’s fired a waitress who posted a negative Twitter comment about a customer, a social media storm followed.

Thousands of people took to social to demand the waitress get her job back.

Rather than responding to critics, the restaurant chain made the critical error of deleting the negative posts.

What could have been a momentary slip-up became a much more serious brand smear.

The best thing you can do when a crisis hits is respond to the problem quickly.

Get ahead of complaints, be vocal, and take action before the problem can escalate.

When Domino’s employees were caught on film mistreating some pizzas, the YouTube uproar that followed threatened to destroy the brand.

Although the situation was eventually handled, the pizza chain still comes under attack for not responding quickly or actively enough after the story broke.

The most effective tool in your PR arsenal is that your company is made up of human beings.

Showing your humanity during a time of crisis is your best defense against social media meltdown.

Delta showed it cared about its customers by responding to complaints personally and going the extra mile to make those individuals feel better.

One customer, for instance, tweeted:

@Delta should offer a new frequent flier benefit: When they cancel my flight and thus screw up child care, they send my wife flowers.

The airline was listening and, to prove it, did just what the customer requested: It sent a boutique to his wife, along with a sweet note apologizing for the hassle the power outage caused the family.

The bottom line: When disaster strikes, treat your customers as you’d treat your friends.

Talk to them, own up to your mistakes, respond quickly, and always be human.

View all posts by Tony Tie