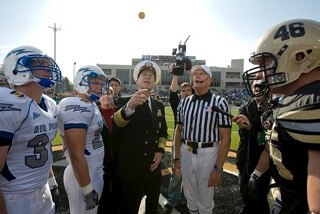 Do you have a rival?

Not just a competitor you face, but a rival that you vie with for the ultimate victory?

In the coming weeks as football season grinds on, one such rivalry will be on display when the U.S. military service academies compete for the Commander-in-Chief’s trophy.

Airmen, sailors, and soldiers may work in conjunction when it comes to the protection of the country, but the distinct cultures of each branch create a remarkable rivalry.

So, what happens when the armed services collide off the gridiron?

You get the tribulations and triumphs of joint basing.

Working as a civilian public affairs specialist for two rival military installations as they combined operations was challenging, to say the least.

As the orders for joint basing came down from Washington, it became clear that change leaders weren’t enough to make this cultural transition work.

Though leaders take responsibility for and implement new standards, internal change needs support from within to be successful.

Internal Change Champions to the Rescue

Like cheerleaders on the football field, internal change champions support your initiatives by believing in you and singing your praises.

They fulfill the classic public relations—it’s more credible to have others say how great you are than you scream it from the bullhorn.

Change comes easier when you provide an example for others to follow.

Airmen and soldiers who began training together in martial arts served as an excellent example of how joint basing could work.

By combining resources and sharing knowledge, this joint team of fighters showcased the core concepts.

Change champions don’t have to be managers. As in all opinion leader outreach, employees who’ve been empowered can get their colleagues on board.

With their influence, they bring others to agreement.

A leader can be too close to the idea. As Gini Dietrich would say, it’s hard to see if your own baby is ugly.

A champion, however, can identify problem areas and bring you recommendations from inside sources.

You may have read about how employees are assigned to roles as change champions. But how authentic and useful is that really?

You need passionate, not ordered, people to support your cause. To find those real change champions, use these five tips in your next search.

As it’s not just the quarterback who will win the game, no big change is ever accomplished alone. Cultivate inside support to make your next company reorganization, rebranding, or other internal change a success.

How do you work with internal change champions in your own organization?

Monica Miller Rodgers is an integrated communications strategist with experience in agency, government and international consulting roles. She is Accredited in Public Relations by the Public Relations Society of America. When not developing marketing plans, Monica can be found traveling, adding new destinations to her list of 30+ countries visited.

View all posts by Monica Rodgers