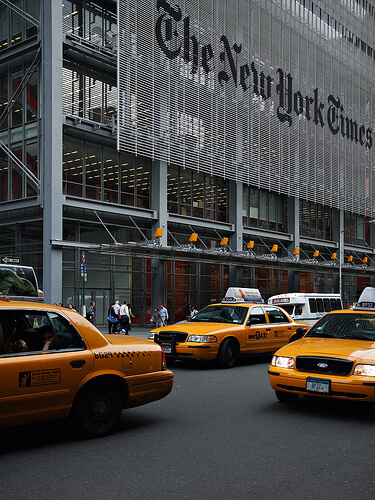 The New York Times has been in the news a lot lately.

Everyone is still abuzz over the firing of Jill Abramson and rightfully so – it is big news.

Whether we ever find out the real reason for her dismissal may be left up to our individual opinions.

As I combed through the never ending stories, another New York Times story popped up that really caught my interest…the “leaked” Innovation Report.

What had me completely spellbound was the sheer lack of vision at arguably one of the top newspapers in the world.

In 2014, the paper has not fully embraced the changing digital times. This is absolutely incredible, particularly for a newspaper that has been reporting the news since 1851.

Perhaps if the company were an old family-run business manufacturing toasters, I could understand how they might struggle to see the value in spending time and money on digital.

But we are talking about The New York Times.

Digital Times, They are a Changin’

In reading the Innovation Report I envisioned a Mad Men-style newsroom with paneled walls and smoke billowing in the air.

The paper’s main approach was that of the 1950s.

The newsroom’s goal had always been to “produce excellent journalism.” And that they do, with 112 Pulitzer Prizes awarded to them since 1918.

But, somewhere along the line, they believed they were The New York Times and that was enough. That would sustain their business. When all along there were news websites and other competitors closing in on their marketshare.

To illustrate just how far behind they had fallen, the report shows that as of January, the Huffington Post had more than 90 million readers, followed by USA Today and BuzzFeed, both hovering around 60 million.

The Times, however, stood at around 45 million–a far cry from its competitors.

No one can argue the way we consume news today has changed drastically from even five years ago. But evolving to keep ahead of an ever-changing landscape is critical to any business. The paper’s Innovation team described it best:

“Each night, we printed our best work. Then we loaded it onto trucks to drive it to cities and towns. Then we enlisted kids to bike from house to house to deliver our papers to readers’ doorsteps. For non-subscribers, we dropped off bundles of papers at corner stores and newspaper racks, and painstakingly tracked sales to see where more copies were needed.

We take this work for granted now, but our home delivery and single-sales efforts represented one of the most sophisticated consumer-outreach operations in history. But when the time came to put our  journalism on the web, we adopted a much more passive approach. We published stories on our home page and assumed that most people would come to us.

The realities of a cluttered Internet and distracted mobile world now require us to make even more of an effort to get our journalism to readers. Perhaps  because the path forward is not clear and requires very different skills, we are putting less effort into reaching readers’ digital doorsteps than we ever did in reaching their physical doorsteps.”

So, what can we learn from The New York Times and its lengthy Innovation Report?

A customer’s needs will always change, but the digital times have catapulted this to a entirely new level.

Conducting a readership survey or customer satisfaction survey can garner some valuable insights into how your customers perceive your business and what it is they are looking for in a product or service.

Could this be the reason for the lack of innovation at The Times?

Perhaps the masthead was afraid if they changed their business and strayed too far from their roots, the paper would lose what they had worked so hard to attract: Loyal subscribers.

But it doesn’t have to compromise the integrity of the paper’s journalistic style and values to gain marketshare.

What it needs is to pay close attention to how its readers are consuming news and provide vehicles that will make it easier for them to find that news.

Overcome the Field of Dreams Syndrome

You may have invented the most incredible life-changing device, but if few people know about it, it will likely sit on the shelf collecting dust.

In a way, The Times did just this, by neglecting to see the value in digitally ‘pushing’ content to prospective subscribers.

The paper thought if they continued to generate outstanding journalism, people would dig through the Internet clutter to find them.

And it didn’t happen.

Advances in technology have changed the way we consume everything, from news to products and services.

And it will continue to do so at a pace that is sometimes scary.

Today’s companies, whether five or 50 years old, need to embrace these changes and modify their business plans and marketing efforts to keep up with the digital times.

They should be living and breathing documents that can be updated on an annual or semi-annual basis, and include representatives from all areas of the business.

I am sure The New York Times didn’t invest six-plus months and loads of money on a report like that to ignore it. Hopefully, they will end up a stronger company poised for the future.

But what we can learn from its digital missteps can have a lasting affect on the way businesses and organizations view, change, and plan for the future.