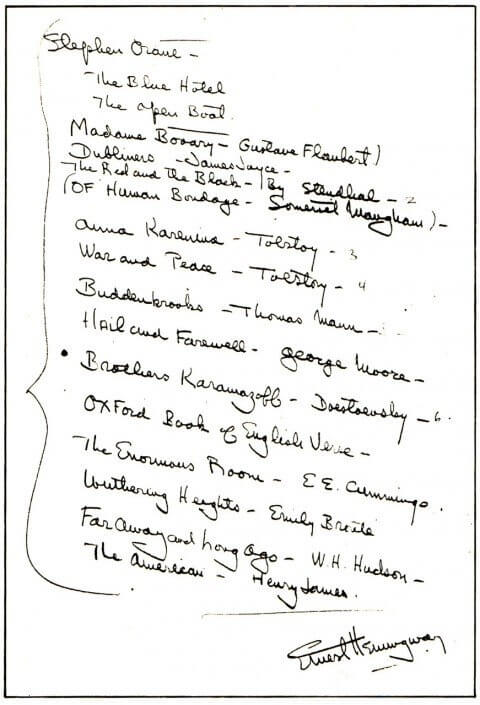 A couple of years ago, Mitch Joel shared “Hemingway’s Advice on Writing, Ambition, the Art of Revision, and His Reading List of Essential Books for Aspiring Writers.”

His caption on it was, “This is rich and yummy.”

Rich and yummy is exactly right.

Because it’s so rich and so yummy, I’ve kept it in Pocket so I can re-read it every so often.

And, as I was thinking about what to write about today, I went back into my favorites list to conjure some ideas.

There it was. The story of Arnold Samuelson, a then 22-year-old who decided he wanted Hemingway to be his mentor.

Because, you know, that’s just something you decide and make happen.

But make it happen he did when he traveled to Key West and showed up and proclaimed to be Hemingway’s apprentice.

Hemingway couldn’t turn him down and he was with the writer for more than a year, which he chronicled in With Hemingway: A Year in Key West and Cuba.

Books to Read and Journaling

It’s said to be the closest thing to a psychological profile of Hemingway written…and it does not disappoint.

Hemingway gave Samuelson a list of books and said:

Here’s a list of books any writer should have read as a part of his education… If you haven’t read these, you just aren’t educated. They represent different types of writing. Some may bore you, others might inspire you and others are so beautifully written they’ll make you feel it’s hopeless for you to try to write.

Some of these were high school required reading and some were part of my university degree, but still, I’ve read only half.

I guess I’m not educated.

But that’s not the end of it. He advises Samuelson read those books and then he says:

Never compete with living writers. You don’t know whether they’re good or not. Compete with the dead ones you know are good. Then when you can pass them up you know you’re going good. You should have read all the good stuff so that you know what has been done, because if you have a story like one somebody else has written, yours isn’t any good unless you can write a better one. In any art you’re allowed to steal anything if you can make it better, but the tendency should always be upward instead of down.

Read the list of books above—all of them—and journal what you like about each one. You already know they’re good so, as you develop content—if it’s fiction, business, content for a blog, or poetry—compete with the things you journaled.

(I would argue you could also read some Pulitzer Prize winning books, even if the writers are still alive, and do the same exercise. The Goldfinch and A Little Life are both great starts.)

With Hemingway also offers advice such as:

If With Hemingway is TL;DR (too long; didn’t read) for you, check out the Brain Pickings article linked to at the beginning here.

It’s rich with quotes, photos, and anecdotes from the book, which will inspire you to practice your craft right this very second.