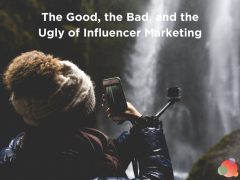 This week’s Spin Sucks podcast episode was inspired by There is No Influencer Marketing Easy Button, an article I wrote a couple of months ago about the decision Unilever made to no longer work with influencers.

(If you aren’t already listening to the podcast, get your butt over there and subscribe already! What are you waiting for?)

The whole thing felt rather click-baity to me. Like there wasn’t a strategic reason for it, other than to get attention.

Because, here’s the thing—it’s not hard to determine if someone has real or fake influencers.

Although it takes some research, some time, and some relationship building, it’s not that hard to connect with influencers, either.

Influencers can certainly make a big difference in your reach, your growth, and your sales…if done well.

Let’s back up for a second.

Part of the reason Unilever made this unilateral decision is because so many influencers have fake followers, which leads to fraud.

In most cases the person either has fake followers or they have fake engagement.

Fake followers, of course, are fake accounts or someone has bought followers.

This tends to happen a lot with professional athletes and with celebrities because brands won’t work with them unless they have large follower numbers.

It also happened with a friend of mine who wanted to go to our monthly Vistage meeting and brag that he had more followers than me.

It lasted all of about three months before it caught up with him (and I’ll never let him live it down).

He discovered it’s not the size of your follower list that matters.

On the fake engagement side, influencers use bots to engage with their social media posts.

They can’t even engage without faking it!

I know everyone is busy, but come on.

All of this leads to influencer marketing fraud…and huge brands such as Unilever to freak out.

Bigger is Not Always Better

There are a lot of definitions of an influencer, but here’s how I see it:

An influencer is someone who motivates his or her community to action.

This is why it drives me crazy when brands focus on big numbers.

Just because you have 10 million followers does not an influencer make.

If you have 10 million followers and most of those people take action because you asked them to, then you have influence.

But someone could have as much—if not more—influence with only 100 followers or 1,000 followers.

It’s about their connection with their audience and how they communicate with them.

Numbers are nice, but they’re not the most important part, and they’re OFTEN a distraction from what really matters.

A small number of interested and engaged people who are a great fit for your brand is generally far better for you than a huge account with a disparate fanbase.

Three Ways to Connect with Influencers

Here are the three things you should look for in an influencer to help you grow your brand, and how to start connecting with them.

Not every collaboration you do will fit all three perfectly, but that’s your starting point for the most effective promotions.

How to Spot Fake Influencers

As you begin to research the right influencers to work with, you also have to carefully consider if they have fake followers or fake engagement.

Aliza Freud, founder of the influencer marketing platform SheSpeaks, has some tips on how to evaluate influencers.

When evaluating influencers, it is important to look at the activity, or rather inactivity, of followers. Fake followers, for the most part, do not engage with content. This is one area that is usually recognized by humans and can be hand-curated. Real influencers get shared, liked, comments, mentioned, and retweeted. A quick way to verify is to Google the influencer’s real name and/or profile handle. If they’re not highly referenced (very few search results), they’re probably fake.

There are some other indicators she recommends people consider:

Influencer Marketing: It’s Not that Hard

You’re not going to start tomorrow with a powerful influencer promoting your brand, but you can start right now on building the relationship.

You don’t want your first real interaction with someone to be asking them for something.

Start by getting to know them a little.

(It’s easy to check, and the pros will check to see if you’re engaged in their communities.)

Once you’ve made yourself known in their orbit, then you can ask them about supporting your brand or program or whatever it is you need their help to do.

Influencer marketing. It’s not that hard. It’s not all fake. It just takes some elbow grease.

Photo by Tim Wright on Unsplash