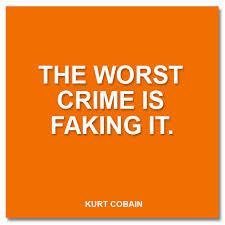 I have a friend who leads a team of attorneys that are the lawyers for the PR field.

Michael Lasky and his team at Davis & Gilbert know anything and everything there is to know about the law and PR and they keep up on what’s happening in the social space, from a legal perspective.

Whenever there is an issue about doing business online (employees making racist remarks on their personal social networks, disclosure and transparency, fake reviews, etc.), I call him.

It’s one thing to know business law. It’s an entire thing altogether to know how it affects your services.

We all know it’s bad to have employees and friends who are not customers write reviews of our products and services online. And yet…

The New York attorney general’s office just closed a year-long “sting” in which they fined 19 companies more than $350,000 in penalties for writing fake reviews.

The suit not only covered the organizations that had fake reviews posted, but the agencies that worked with them.

In 2006 we had a client who had released an app. They were very excited about it, but weren’t making any headway in the iTunes app store.

One of our young professionals, who worked with the client day-to-day, came into my office one afternoon and told me she’d been asked to write a review of the app in the store…and the client wanted all of us to do the same.

At the time, astroturfing and fake reviews weren’t considered illegal, but we knew enough to know it felt unethical.

We told the client we would not do that for them and they fired us.

I guess that ended up saving us quite a bit of money in penalties!

While PR firms were not the target of this particular investigation, it’s something to be aware of and be cautious of when or if you are asked to write reviews on behalf of a client.

The NY attorney general’s office posed as a client to several SEO firms and discovered they were paying freelancers around the globe between $1 and $10 per review posted.

It’s not uncommon to hear about PR firms that are creating whisper campaigns or astroturfing. Know that if your firm participates in those kinds of practices, you could be next.

I don’t know about you, but I don’t want to dole out hundreds of thousands of dollars for something that can so easily be avoided.

The law is sometimes very vague and social still is the Wild, Wild West so it’s hard to know what’s right or wrong.

If you can’t use your moral compass as your guide because your executives or clients are asking you to do something that violates it, Lasky suggests the following four things to help you make your case.

All it takes is a little common sense and the cajones to step up and say, ‘This isn’t right.”

Yes, it could cost you a client or two, and while that is painful in the short-term, it’s a lot less so than being the target of an attorney general investigation.