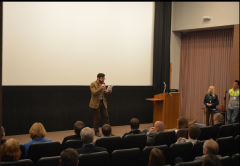 If you’ve been hanging out around Spin Sucks for a year or more, you’ll know I’m a big fan of reading fiction to help your writing.

I don’t talk about it a ton, but it comes out every once in a while, particularly after I’ve read a really good book (cough, Defending Jacob, cough).

That’s why, during Content Jam, I was so excited to see the closing keynote. Billed as WRITE CLUB, I wasn’t entirely sure what to expect, but I knew anything with the word “write” in it was going to be compelling.

Jill Pollack, the founder of StoryStudio, came to the stage at the top of the hour and explained we were about to see two people square off, based on stories they had written.

They were given a topic – the retro or modern lives of social media – and they had only five minutes to tell their story and convince the audience their version was the best.

What is WRITE CLUB?

But before I tell you what happened, let’s back up and talk about this concept.

You’ve likely heard of poetry slams, where poets read or recite original work for a live audience. Their performances are judged by pre-selected members of the audience and they can win cash or bragging rights.

Two writers go up on stage and they clash over opposing ideas. They are given their topic ahead of time and their job is to write a story so compelling you want to vote for them.

They have no more than seven minutes to read you their story, gain fans, and garner votes.

The audience chooses a winner and a cut of the show’s proceeds goes to a charity of the victor’s choosing.

Jill asked for audience members to volunteer to serve as judges. It’s likely no surprise (it wasn’t to us) that our own Laura Petrolino practically climbed over the seats to get to the stage first. She was joined by two other attendees and they were given directions: Choose the winner by gauging the audience’s applause.

Ali Kelley, a StoryStudio student in their novelists roundtable, was given the social media retro topic. Throughout her storytelling, she talked about life in the 60s, as she imagined it…having been born much, much later. She was masterful in talking about why it was so much simpler back then – with back of the pickup truck rides and drinking Coca-Colas with your friends – then today’s fast-paced digital world.

Then Keith Ecker, a StoryStudio faculty advisor, came on stage to talk about why today’s world is the place to be. He highlighted everything that is great about social media and made fun of things such as talking in hashtags and everyone wanting a viral video.

In the end, Ali won…even though we all live in the fast-paced digital world and Keith made a great argument for it. She told her story slightly better and even had to catch herself from laughing while she read.

It was an incredible 10 minutes and the conference ended on a very high note.

Since then, I’ve perused the StoryStudio site (multiple times), signed up for a couple of classes, and bent Jill’s ear about how this kind of practice might not just improve my writing, but my speaking.

Reading – and writing – fiction uses different brain muscles, which is why I’m such a fan of it for business content creators. Being able to transform readers to another world through the written word provides you the opportunity to think about business storytelling differently.

And now you have the opportunity to not just create the stories for your organization, but to tell them out loud during a new business presentation, through a series of videos, or during an industry conference presentation.

It’s scary. It’s out of most of our comfort zones. It puts you in a position to be critiqued. But it will make you better.

WRITE CLUB is in Chicago, San Francisco, Atlanta, Los Angeles, and Toronto. If you live in one of those cities (or are visiting), I encourage you to check it out.

If you’re so inclined, you can start a new chapter with a simple application and some passion.

As you begin to think about your New Year’s resolutions, add fiction reading to your list, consider taking creative writing courses, and check out a live lit event near you!