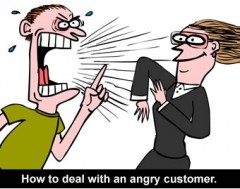 A few years ago, a friend and former colleague called me. He was starting a business and needed our help.

Because of my personal relationship with him, I jumped at the chance to get in on the ground floor and build something with him.

From the first meeting, though, something seemed amiss.

They were launching a daily deal site, about the same time everyone and their brothers were doing the very same thing.

You see, people saw the success of Groupon, saw the low barrier to entry, and went for it.

But my friend thought he had something different: He wanted to pay the retailers more than Groupon, Living Social, or anyone else was paying. Which is great…but consumers don’t care about that and he wanted a big consumer launch.

From the consumer’s point-of-view, there wasn’t anything different about his company. It was just another daily deal site in an already crowded market.

But I ignored all those red flags and took him on as a client.

During our first meeting, he looked at my team and said, “Don’t F this up.” I looked him straight in the eye and said, “Oh yeah. Because that’s what we intend to do. Screw things up.”

I was angry, but more, my team was completely demoralized. No one felt like doing really good work for him, but they were professionals, took the hit to their pride, and set out to prove him wrong.

Two weeks after we signed the contract, the Chicago Tribune did a roundup of all of the daily deal sites in the city (more than 100, by-the-way).

I’ll never forget the phone call I received from my “friend” when that story ran. He was upset his new company (which hadn’t launched and didn’t yet have a website) wasn’t included in the roundup.

Instead of having a professional conversation with me, or – I don’t know – having realistic expectations, he threw every curse word in the book at me. I finally had to say, “Let’s have this conversation when you’ve had a chance to calm down.” And I hung up.

Well, calm down he did. He fired us an hour later.

I tell this story because, unfortunately, things like this happen in business.

I’ve never understood people who behave this way, but they do…and often get away with it.

So what do you do if you have angry clients or an angry boss who can’t use their words and express their frustration by yelling and swearing?

And speaking of punching bags, it may get to the point where you are just being abused. That’s not okay. That’s when it’s time to stick up for yourself and tell the person that kind of behavior isn’t appropriate. If it continues, go to your boss about it.

Just like we would recommend our clients handle their angry customers gently, the same goes for you.

Now it’s your turn. How do you deal with angry clients?