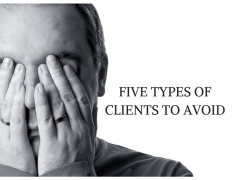 In the land of “all things agency and freelancer” resides an entire village of idiots, leads, and prospects.

There also resides (if you are unlucky enough) clients who make you want to put yourself into a straight jacket and walk Captain Hook’s plank…voluntarily.

Who are these undesirable creatures taking up valuable space in our kingdom of potential perfection where “thank you,” “way to go,” and “wow, you are the absolute smartest person on the planet” reign supreme?

Well, I will tell you.

In no particular order of importance, here are the five types of clients to avoid at all costs.

Because no amount of money or big brand name drop in the world is worth your sanity.

These clients are famous for starting most sentences with a combination of patronizing words-slash-phrases ranging from “look here” to “listen” to “frankly” to (my personal favorite) “honestly dahhhling.”

This is the Narcissist.

They have a distinct way of making you feel like complete and utter crap while simultaneously holding you hostage by his or her unyielding voodoo powers.

These powers generally come in the form of:

Note: A good indicator of this type is his-her inability to let you finish a sentence without interjecting.  In other words, “Magnus Interruptus.”

This is a common German term for those pseudo-intellectuals who think they know more than everyone else.

They aren’t afraid to blather on and on about just how much they know, where they learned it, and how—because they know it—you should just shut up already and do what they say.

Unlike the Narcissist, whose powers are somewhat covert, the Besserwisser’s powers have the ability to simply annoy you to death.

HINT: If your scheduled, 30 minute intro-call ends up being two hours, you probably have a Besserwisser on your hands.

This human being will take up your precious time with their ridiculous antics.

Hiding under the auspices of being guided by a higher, universal, mothership source, while simultaneously being completely connected to their innermost thoughts and feelings, this particular individual could not make a decision or formulate a complete thought if they were standing on the precipice of a jagged cliff.

That is to say: If their life depended upon getting in touch with their rational, logical, decision-making brain cells, they would rather be shoved over the edge to a certain death.

And if you take them on as a client, you may just beat them to the punch.

I am going to make this very short, because it is very simple:

If two of these three things are present, hightail it through the yellow light, and don’t stop, ever.

If you stick around, I guarantee your skin will slowly turn a light shade of blue after the sheer frustration with their inability to communicate in the way in which you need them to communicate. End of story.

The Don Juan (or On Rare Occasions: Donita Juanita)

Now, to be fair, there is nothing wrong with a little flattery, the occasional flirty comment, or (I swear this has never happened to me) a bouquet of red roses to say “thank you for doing a great job.”

However, if DJ can’t seem to focus because he-she is too busy verbally assaulting you with inappropriate, double-meaning, moronic one-liners, then the chances of you slapping him-her in the face getting work done efficiently, and without wanting to take a hot shower after every meeting, is slim to none.

They want to have their cake and eat it too, to which I would say: Pack it up and take it home.

Just make sure you walk backwards to avoid the bum pinching on your way out.

Whatever You Do, Avoid these Clients

So, there you have it. If you find contemplating whether or not to sign one of these types, I will leave you with this…

No one is perfect, and everyone has their “stuff.”

But rest assured, if you sign on the dotted line, you must be prepared to spend at least 10 hours a month in therapy.

Consider it a pre-emptive strike. It has certainly worked for me.

Rebekah Iliff is a writer, author, and entrepreneur based in Nashville, Tennessee. Her work has appeared in Inc., Entrepreneur, Mashable, Forbes, Business Insider, HuffPost, Points in Case, Weekly Humorist, Slackjaw Humor, Erma Bombeck blog, The Satirist, Little Old Lady Comedy, Chicken Soup for the Soul: Be You, and countless other publications. Her book, Champagne for One: a Celebration of Solitude (Collective Book Studio/IPG), is now available everywhere books are sold. Prior to pursuing a full-time writing career, Rebekah was a Silicon Valley tech entrepreneur and founder of talkTECH Communications in Los Angeles, California. She has lived and loved in Nashville since 2017.

View all posts by Rebekah Iliff