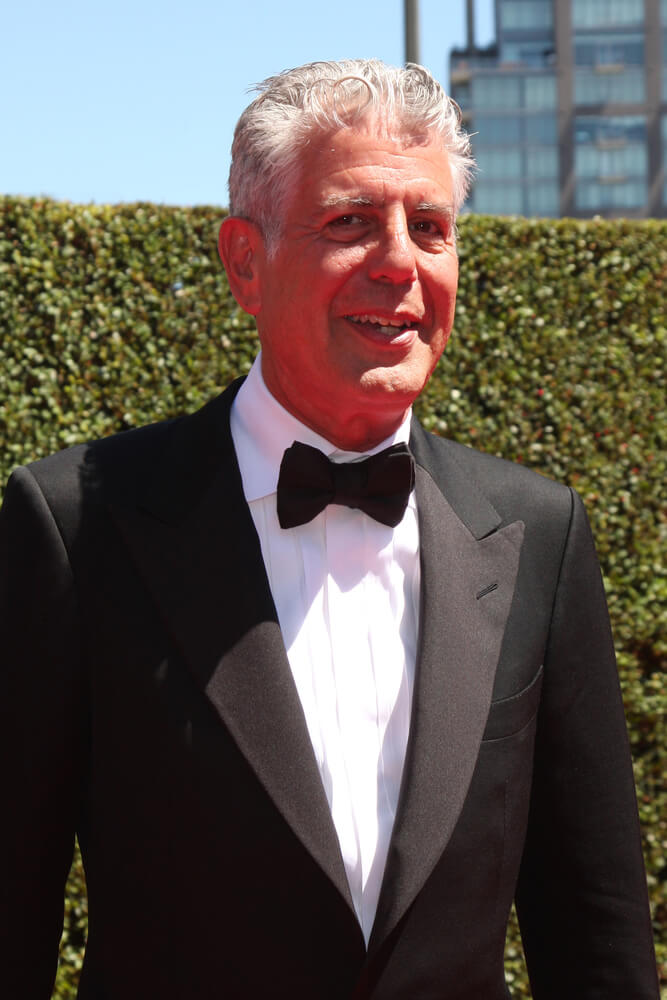 I wrote a similar post eons ago, but wanted to revisit this topic.

Because I love Anthony Bourdain’s swag, find creative inspiration in his work, and guess what?

I think a sharp-tongued, politically incorrect, TV host with his own brand of snark might be your perfect guide to content marketing done right.

For those who don’t know, he’s a guy with a unique world view that’s hard to describe. It has stirred up trouble, but also catapulted him to fame.

This “flavor” is why many love him.

I’ve been a fan of Mr. Bourdain’s work from the start.

He has the audacity to speak his opinion, drink on camera, and display an artful contempt only his fans can appreciate.

He’s also honest, often describing a past filled with drugs, years of financial struggle, and issues with authority.

This is called transparency and it sure works for him.

Now an author, speaker and TV host, he didn’t reach this level of success until later; as in, mid-40s later.

He struggled with addiction and admits he wasn’t anything close to a star chef, but his life changed in the blink of an eye.

So, what does this middle-aged New Yorker have to do with blogging? And how can he teach an aspiring content marketer to be better at his or her craft?

Well, please read on to find out…

At 44 years of age, he was an overworked chef, in debt, and living paycheck-to-paycheck, but he wrote.

And his writing, namely “Kitchen Confidential,” led to his amazingly quick route to success.

During all those years as a chef he wrote, and then wrote some more.

He mainly wrote fiction, but one article in The New Yorker propelled him to success.

Why was it so successful?

He was honest and did what no chef at the time would dare do… trash the restaurant industry.

It’s Best to Not Take Yourself too Seriously

A little self-deprecation is good for the soul, don’t you think?

He’s even written that it would be “entirely fair and appropriate” were he described as “a loud, egotistical, one-note ***hole who’s been cruising on the reputation of one obnoxious, over-testosteroned book for way too long and who should just shut the **** up.”

Never Be Afraid to be Yourself Online

A caustic wit and a bit of black humor is in his DNA and he’s not afraid to show it.

He doesn’t hold back when it comes to discussing past mistakes.

And there’s that potent point-of-view.

Some say he’s gone too far with this in the past, but hey, it’s all part of the appeal.

In a nutshell: He’s not afraid to speak his mind.

He doesn’t care what you think

But, you don’t need go quite as far as Tony.

Just look at our own Gini Dietrich. I don’t think she offends too many, with the exception of professional speakers, social media nerds, or professionals who can’t not wear jeans.

New Experiences Give You the Creative Juice You Need

Really. A different perspective will help your creativity.

He also willingly ate a dirt-covered omelet cooked by a Namibian tribesman.

He took psychedelic Ayahuasca, and was graphically honest about its effect on his body (I’ll spare you the details).

And here’s a New York City liberal who broke bread with Ted Nugent, and admits he loves to shoot guns, play with crossbows, and do other manly stuff.

Don’t go out and shoot crossbows, eat someone’s pet lizard, or take a mind-bending Ayahuasca trip in the jungle, unless you want to, of course.

Just be open to new stuff.

It’s good for the soul and might provide the creative juice you need.

This mindset brings more life to your own brand storytelling.

Back to Mr. Bourdain.

Okay, okay, he’s offensive to some, but isn’t that better then a boilerplate image built to please the masses (read: pretty much any show on the Food Network)?

He was a chef, but writing changed his life. And the four points above simply made his career.

I just hope those four lessons help you bust a move in the competitive world of content marketing.

Who ever said content marketing had to be boring?

Craig McBreen is the founder and principal of McBreen Media, a Seattle-area branding and integrated communications firm helping businesses get ideas, messages, and visuals working in harmony to reach the right audience and grow their brand.

View all posts by Craig McBreen