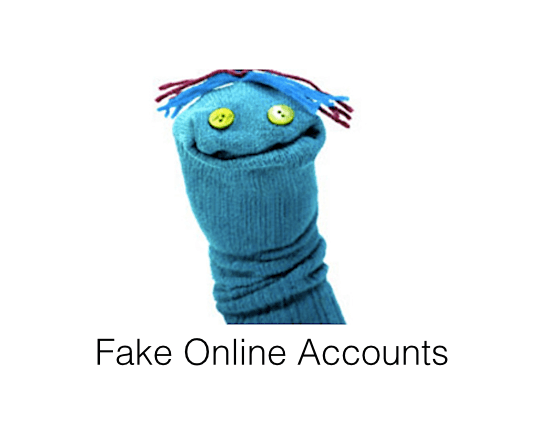 Not a gigantic firm with a huge, global presence, it would take a lot to garner the attention of an organization as large as Wikipedia.

But garner it they did…because they had created more than 300 sock puppet accounts for the sole purpose of editing pages in the online encyclopedia.

A sock puppet refers to a fake account created online for the purpose of writing reviews or trolling certain blogs anonymously.

When a person gets behind a computer screen and has the ability to remain anonymous, the things said and done can get really nasty.

Perhaps you remember the story of Florida pizza shop owner, Scott Van Duzer, who hugged President Obama during a campaign stop in 2012.

The President stopped by Van Duzer’s restaurant to recognize him for his efforts in helping provide blood to patients in his county. What Van Duzer didn’t expect was making national news…which brought out the trolls and sock puppets on his company’s Yelp page.

People from all across the country began leaving negative reviews on the page, from fake accounts, to demonstrate their disdain in the entrepreneur.

Most of y’all Democrats can’t afford to eat at this restaurant anyway. They don’t accept food stamps.”

Hundreds of anti-Obama reviewers – through sock puppets, not real accounts – flooded the page to criticize Van Duzer, his restaurant, and his political beliefs (which is kind of funny because he didn’t vote for Obama).

Back to Wiki PR

According to The Independent, a publication in the U.K., the letter from Wikipedia outright accuses the firm of sock puppetry, which undermines the principles of objectivity and neutrality of the site.

We have come to the opinion that, based on the evidence we have to date, that agent(s) of your company have engaged in sockpuppetry or meatpuppetry to, among other things, make it appear as if certain articles are written by unbiased sources when in fact those articles are authored by Wiki-PR for money.

To boot, writing or editing articles on Wikipedia when money exchanges hands, is unethical. So, for instance, if you are on retainer with a client and they ask you to edit their Wikipedia page, you are being paid to do so.

This is a big no-no.

But it occurs…and not just with the PR firms that receive letters from attorneys.

A study conducted last year by the Public Relations Society of America, found that 40 percent of PR professionals have edited Wikipedia.

Many professionals don’t consider it unethical because they either are being asked to do it by higher ups and don’t realize what they’re doing is wrong or they believe it is their job to shine the very best light on their client’s organizations, even if it means deleting or editing the bad stuff.

But it isn’t just the agencies who ignore the paid editing ban.

The same study showed 24 percent of company pages were created by an internal PR team.

More than half of the people who were polled admitted to writing or editing Wikipedia pages at some point between 2012 and 2013.

Which is why it’s encouraging to read 11 of the largest PR firms in the world have signed an agreement to follow the Wikipedia rules. They also have promised to self-police the industry and educate their clients on the unethical business practice of editing the pages.

From the statement released:

On behalf of our firms, we recognize Wikipedia’s unique and important role as a public knowledge resource. Our firms believe that it is in the best interest of our industry, and Wikipedia users at large, that Wikipedia fulfill its mission of developing an accurate and objective online encyclopedia. Therefore, it is wise for communications professionals to follow Wikipedia policies as part of ethical engagement practices.

It’s a great step in the right direction.

As I told PRNewser, astroturfing, whisper campaigns, sock puppeteering, and unethical business practices are not only bad for the PR industry, they’re bad for the business community at large. We need more leaders who are willing to take a stance like this.

To learn more and to stay up-to-date on how this all plays out, you can join the Corporate Representatives for Ethical Wikipedia Engagement Facebook group.