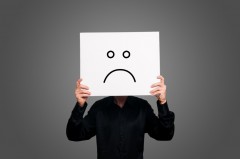 A few years ago, I was traveling with a friend and business advisor. We were in D.C. for a board meeting of his industry’s trade organization, where I had been invited to speak on the topic of social media.

The evening before, we were in the hotel bar having a drink and he asked me to show him around the business Facebook page his team had just created.

As it so happened – and purely coincidentally – a woman posted on the wall about how unhappy she was. Her mom had just had her hair done in one of my friend’s 70 assisted living homes and the stylist had turned it purple.

He backed away from the computer faster than you can say “purple hair” and looked at me like the keyboard was on fire.

After I made the obligatory old lady blue hair joke and got him a drink from the bar, I walked him through how to deal with negative criticism online.

I was reminded of this when I read the New York Times article about General Motors using social media to respond to the 1.6 million customers affected by the most recent recalls.

If you visit their Facebook page, you’ll see a mixture of brand building status updates, as well as responses to negative criticism. 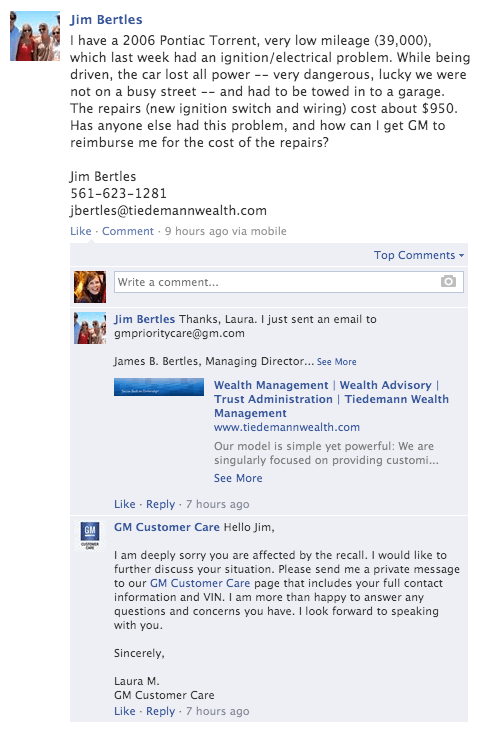 To be fair, when I checked the page last night, it’d be nine hours since the team had responded to anyone, but it does look like they’re going through a couple of times a day to address everyone.

But they are addressing each one of them – individually – trying to answer their questions, and engage them in private messages. All things the communications pros recommend when dealing with negative criticism online.

The approach to both continue building the brand and use the social networks for customer service is a very narrow line organizations have to walk online.

It used to be if someone were unhappy with your company, they would tell a handful of friends and maybe send a letter, hoping to get a response from the CEO.

Today you can post on a company’s social network – something they own – and hundreds, if not thousands, of people will see it and fan the unhappy flames.

Your brand is how customers feel about you (which, coincidentally, is what chapter seven of the forthcoming Spin Sucks is all about) and what you want them to know.

It’s a fine walk between both and GM is handling it extraordinarily well.

Here is what you can learn from them:

Ninety percent of the time, the person will go back to the social network and thank you for responding to them.

From the New York Times article:

Lauren Munhoven turned to Twitter after wasting an hour on the phone with G.M. trying to get help with her 2006 Saturn Ion.

She tweeted, “@GM your agents keep telling me to take my car to a GM dealer for the recall, after I’ve explained I live on an island in Alaska! Help!!!!”

After a series of private messages with a member of G.M.’s Twitter team, the company agreed to pay the $600 cost of a round-trip ferry to ship Ms. Munhoven’s car to the nearest dealer, about 300 miles away in Juneau, and pay for a rental car for the time she is without the Saturn.

She credited the public nature of Twitter complaints for getting G.M.’s attention. “Over Twitter, the service was a lot better,” she said.

She was so pleased that she posted a public thank-you on Twitter.

When my friend backed away from his keyboard as if it were on fire, I had him walk through the three-step process.

Of course, as the CEO of a gazillion dollar firm, he wouldn’t typically be the one responding to negative criticism online. But he was there, it was after hours, and the comment was fresh.

So he responded, “I am so sorry to hear about your mother’s experience. I am the CEO. Would you mind sending me your phone number?”

She did and they had a conversation. He offered her mother three free hair cuts in her assisted living home.

The daughter went back on Facebook and provided a glowing recommendation that gushed almost embarrassingly so.