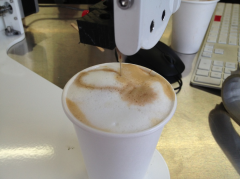 Last year we worked with a company whose goal is to become one of the greatest companies of all time.

When you think about those that already hold that title, who comes to mind? Apple? GE? Starbucks?

Working with that client – which is a business-to-business organization so their vision becomes even more difficult – we looked at a lot of companies that already hold that title…or are well on their way.

What we found is one thing they had in common: They all are great companies, from their culture, their business practices, their ethics, and their storytelling.

Walmart is Becoming a Better Company

While I don’t necessarily think Walmart is one of the greatest companies of all time, Leslie Dach – the former executive vice president of corporate affairs for the organization – posed an interesting idea in the October issue of Harvard Business Review.

He tells the story of how, when Hurricane Katrina hit, Walmart…

…mobilized to provide meals, emergency supplies, and cash. No internal debate was needed—those were obvious right things to do. But the experience opened our eyes to the broader opportunity to make a difference.

Two months later, then-CEO Lee Scott gave a landmark speech in which he asked, “What would it take for Walmart to be at our best all the time? What if we used our size and resources to make this country and this earth an even better place for all of us? And what if we could do that and build a stronger business at the same time?”

The company set goals around sustainability, waste reduction, and the empowerment of women and, today, the goals of every employee includes getting to that new vision.

Storytelling is Easy with Great Companies

What is the one thing the greatest companies of all time have in common?

They are better companies because of what they do for their communities and for the world.

Because of that, the story – from a PR perspective – becomes easy to tell. They don’t have a coach molesting team members and everyone avoiding their eyes so as not to have to be the ones to tattle tell. They haven’t decided to defund a woman’s organization because they don’t believe in their politics. They certainly don’t hire PR firms to whisper lies about their competitors.

They truly set out to do the best thing – not just for their shareholders – but for their customers, their communities, and the world.

If your organization has a crisis, it’s a lot easier to manage if everything else you do is on the up-and-up. I get teased a lot because I’m ethical to a fault, but I truly believe to become a great company, you have to act like one.

Great companies don’t lie. They don’t steal. They don’t cheat their employees. They don’t become greedy. They don’t allow people to behave badly just because that person generates a lot of revenue.

Great companies stop and listen to criticism, they commit to getting better, they set goals and a vision larger than themselves, and they truly behave better.

When all of that happens, the storytelling is easy.