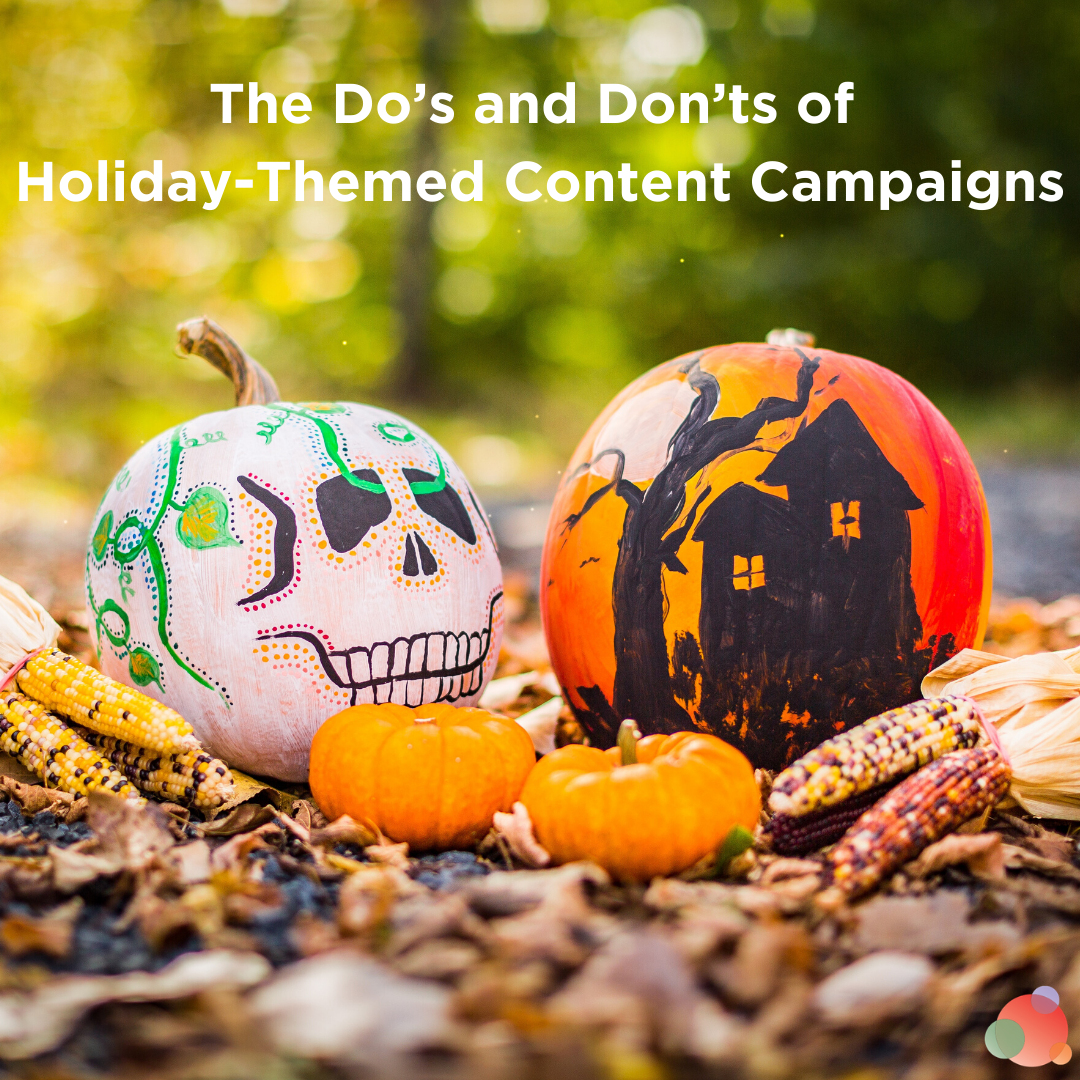 In a couple of days, unless you live in one of those municipalities that always moves Halloween to the weekend (lame), the streets are going to be filled with small children dressed as ghouls and ghosts running from door-to-door collecting candy from strangers.

Halloween is a big deal in Chicago. A HUGE DEAL. It’s kind of over-the-top.

There is trick-or-treating in our neighborhood a few days before.

Then there is a parade and party at school. And then we finally get to go actual trick-or-treating.

By the time we get to the third party of the season, I am handing candy back to the homeowners.

And I love candy. But enough is enough!

Me? I don’t dress up. I’ve never loved Halloween so I’m happy being the party pooper (and the mean mom who donates our leftover candy).

But party pooper or not, the holidays are fun and this is an exciting time of year.

And it doesn’t just have to be for kids.

Communicators can have fun with the holidays, too.

We enjoy themed content, especially around the holidays at Spin Sucks.

Laura Petrolino has an annual blog post she does on the current communications-themed costumes.

I always write a list of the literature villains we love to hate.

And, starting in December, we do the 12 Days of Christmas, which is my favorite because we use it celebrate our community and our clients.

Done well, holiday-themed campaigns can connect you with your audience, generate a lot of engagement and generally be a good time for everyone.

Done poorly, they’re absolutely cringe-worthy, sparking more conversation about how brands don’t get it than pictures of pets in costumes.

Before we get into the do’s and don’ts, let’s get clear on what I mean by a holiday-themed content campaign.

A holiday-themed content campaign can be on social media, a series of related articles, a video series, a contest, or a series of images or photos.

It also can be generated by your organization and/or by your community.

It can live on social media, on your blog, on your YouTube channel, or even in a special location on your website.

Keeping it somewhere on your website and sharing it to social media, through email, and on other platforms is always ideal.

But if it’s not possible to do it that way, especially as you’re starting out, worry less about where it’s housed or it’ll stop you from doing something fun and creative.

Now that we have that out of the way, we can talk about the do’s and don’ts of holiday-themed content campaigns.

While it’s not exactly holiday-themed, I love what Talkwalker and HubSpot do with their annual trends content.

You could call it New Year-themed because they do it in advance of the new year to help you plan.

This year, they worked with nearly 70 influencers to build one of the best pieces of content on trends I’ve ever seen.

You can learn about everything from TikTok and virtual reality to digital transformation and customer experience.

What Talkwalker and HubSpot did well is work with 70 influencers.

And you know what those 70 people will do, don’t you?

They will share the crap out of it, which will build top-of-the-funnel leads for both Talkwalker and HubSpot.

A+ in interactivity for them.

If you’re thinking about Halloween- or Thanksgiving- or Christmas- or Hanukkah- or New Year’s-themed content, get your community, customers, or audience involved.

Ask for pictures or stories or run a contest.

To make it as interactive as possible, make it easy for them.

Be clear about why you’re doing it, how they can help, and how you’ll use their content.

Also make sure you and your team are also involved.

If you want user-generated content, you need to be prepared to do the same.

This is an opportunity to let people see behind the scenes of your organization and of your colleague’s lives, too.

We’re already planning for our 12 Days of Christmas series and it’s still two months away.

You definitely don’t want to get started on 31 days of Halloween costumes that are office-appropriate, but run out of ideas or user-generated content on day 20.

The intent was admirable.

The execution was, well, let’s just say it was lacking.

I’m not sure what they wanted you to do after watching the videos, especially the one with the shrieking child.

It’s clear they want you to think there is a war on Christmas by the title and description they used, but the video?

Well, I’ll let you watch it for yourself.

The first don’t, then, is don’t alienate part of your audience.

While the intent on religious freedom is a good one, saying there is a war on Christmas while including a shrieking child with falling ornaments does one thing: alienates every person in your audience who does celebrate Christmas.

Don’t Have the Wrong Attitude

The second don’t is not to approach the season with the wrong attitude.

Your fun and edgy Halloween campaign is going to be very different than your thoughtful and respectful Memorial Day one.

Keep in mind who your audience is and what they might see or take away from it.

On Laura’s aforementioned blog post about communications-themed costumes, we used a photos of dogs dressed as ghosts.

What we didn’t consider is some might consider that racist because the ghost costumes looked a bit like white hoods.

Of course, that was not our intention AT ALL, but it did cause a bit of an uproar and we changed the photo.

Think about specific ways people might observe the holiday.

With our 12 Days of Christmas series, there is always at least one person who will privately email me to say the 12 days don’t actually start until Christmas Day.

And there is always at least one person who will want it to include the other December religious holidays.

We’ve thought through both of those issues (and many, many others).

We start our 12 days on the first Monday in December because, while they don’t traditionally begin until Christmas Day, NO ONE is reading blog posts the week between Christmas and New Year’s.

And, because it’s a series that celebrates our community and our clients, we want to be certain the content is read throughout the month and not missed while everyone is enjoying their families and lots of great food.

Could we call it the 12 Days of December? Sure.

But it doesn’t have the same appeal or widespread knowledge as the 12 Days of Christmas.

(Plus, it allows us to make up our own song to go along with the tune…and a partridge in a pear tree.)

Don’t Stray Too Far from Your Brand Voice

The final don’t is don’t stray too far from your brand voice.

While holiday-themed content is a good way to push boundaries, you don’t want to go totally off the wall.

For instance, a photo contest for baby Halloween costumes is for a far different audience than the many different types of sexy Spongebob Square Pants costumes (they really exist, which is both fascinating and frightening).

I will also say this: you can think through every possible scenario and still be surprised by someone’s reaction to something.

The best advice I can give you there is recognize you may unintentionally offend someone and be willing to make changes very quickly.

Don’t let this scare you away from holiday-themed content, but do be flexible enough to adapt quickly and fix it.

Your Own Holiday Campaigns

Do you participate in branded campaigns around the holidays?

Do you want to send me your Halloween photos? I would love it!