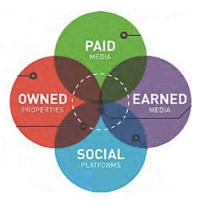 Earlier this week, we talked about native advertising and I got everyone worked up into a tizzy. Most of the comments were centered around, “Facebook Promoted Posts suck.”

Richard Edelman discussed why in, “Paid Media: A Change of Heart,” it isn’t working as well as users would like.

He says, “These deals are primarily being done by media buying firms directly with the client. The person within the client organization running these initiatives tends to be the CMO, not the chief communications officer. The result is that the work stream tends to be derivative of advertising in its classic form, not in its potential new iteration.”

Because of that, the ads that should be content are just ads in a new medium. That’s why we hate them and why they’re so jarring to our user experience.

But native advertising is more than Facebook Promoted Posts and Sponsored Tweets. It’s a complete blur of the lines between advertising and PR. Ads become content and content become ads.

Think about Pinterest, as an example. All of those images you pin lead back to something you can buy, in most cases. You find a shirt you want, you pin it to your Clothes, Glorious Clothes! board and then, when you’re ready to buy, you click on the image and it takes you to a place where you can make the purchase.

That’s an ad. Native advertising at its finest. But it doesn’t feel like we’re being sold because it’s something we want, in a form that is appealing to us.

Edelman goes on to call for those of us in PR to change the game of how this works. And I agree. We are, after all, natural storytellers and we have a nose for news and what types of content people read and share.

But the examples he uses aren’t there yet.

For instance, they are working with the Associated Press to buy – and send – tweets on behalf of Samsung during the Consumer Electronics Show.

The idea is an interesting one: Work with the big guys to send tweets on behalf of an organization to its followers. But it doesn’t get us where we need to go.

Someone in the comments said, “Isn’t this just an advertorial in a new channel?”

I will hand it to Edelman that they aren’t afraid to take some risk and try new things, even to make mistakes so big they are used as case studies on what not to do.

But they aren’t quite there yet with the paid and earned media blend. At least, not in this example.

It’s bigger than working with media outlets to sponsor tweets from their accounts.

While we still have to disclose the content is an ad (“sponsored by” or “presented by” are good terms to use), there are ways to make this all work so it’s all part of the user experience.

As much as I hate to use Mashable as an example (sorry, Howie!), they do a really nice job bringing all of this together in a way that continues to make them money.

If you read, “Why It’s Time to Get Excited About Digital Advertising,” they show you exactly how ads flow into their content.

With the exception of one little sentence that says, “Presented by Volvo,” you can’t tell the story is an ad.

This is where things are going. All of our disciplines are blurring. Go make friends with people who do advertising for your company or work with your clients. Make friends with those in the marketing department.

Figure out how you can all work together. Because this? This is the future of PR.