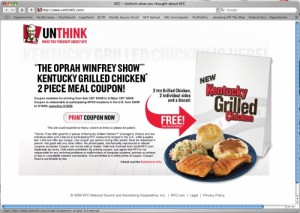 Of course, it goes along with the thinking that, as long as people are talking about you, you don’t care if they love you or hate you.

But is that the best thing for a business? Do people buy from people they don’t like, but do so just because they’re in the news?

I’m here to stop that thinking.

Not all publicity is good for you, for your business, or for your community.

Sure, not all news will be good news. Even the best companies will have some negative things written about them, but it’s in how you respond that makes, or breaks, the game.

In January of this year, Komen decided to no longer fund Planned Parenthood, which created a huge PR mess, not because of the decision, but because the communication around it happened.

When the organization came under fire, Nancy Brinker, the organization’s founder and CEO, fumbled her way through interviews. Her messaging was never consistent and it was clear they hadn’t thought through any of the implications of removing funding from an organization that provides free breast cancer screening to the underserved population.

They ended up reversing the decision, but the damage was already done. Top executives began to leave, volunteers turn their attention elsewhere, and donors sent their money directly to Planned Parenthood. And, just last week, Brinker and the organization’s president (along with two additional board members) stepped down.

If you’re of the “any publicity is good publicity” mind, it makes sense to consider what can happen to an organization when negative news isn’t handled correctly … as happened to SGK.

But it doesn’t have to be negative news that can hurt an organization.

In May of 2009, Kentucky Fried Chicken franchises across the country struggled to keep up with the four million new customers after Oprah Winfrey told viewers of her show they could get a free meal by printing out an Internet coupon.

People took to the web to print out the coupon and head to their closest KFC.

But the problem? The Oprah Effect created such a demand the website couldn’t keep up and many people were met with error messages or a timed out site.

If that wasn’t enough, the giveaway happened closest to one of the restaurant’s busiest days – Mother’s Day – and the franchisees were responsible for the costs associated with the free grilled chicken meals, cutting into their profits and leaving them scrambling to order product they didn’t have in store.

When is Publicity Right?

In the Oprah/KFC example, the publicity would have been perfect, had the restaurant anticipated the response, both by increasing their server storage space for a few days and alerting their franchisees of the promotion and what it could mean in terms of masses of new customers coming through their doors in a few short days.

There is more to “getting your name in ink” than just a story running. Have you considered the message you’d like delivered? Is your organization ready if critics don’t agree with the message you’re communicating? Are you ready if your media relations push is so successful, it has the potential to shut you down?

Publicity, when done well, is fantastic for brand awareness and credibility, if timed correctly and if you work with journalists, bloggers, and influencers that are perfect for your brand. But if you believe all publicity is good and you just shoot “news” to everyone on a list, be prepared for backlash.

A version of this first appeared at ASI, a sports and entertainment branding agency.