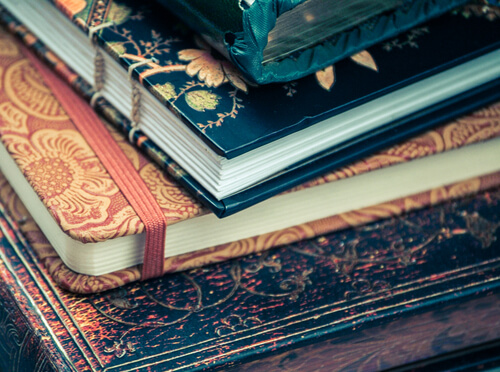 When Batman came out, Michael Keaton was on David Letterman to promote the movie.

Apparently he spoiled the plot of the movie during that interview, but that’s not what I remember.

What I remember is the story he told of his son who got on a fight on the playground.

The kid he was arguing with said, “My dad is better than your dad. He’s an accountant!”

Michael Keaton’s kid grinned and said, “Oh yeah? My dad is way better than your dad. My dad is Batman!”

It’s funny that I remember that. I mean, it wasn’t just yesterday. I had a face full of zits (my poor cheeks were a mess until well after college) and I was teasing my bangs so they looked like I had run into a wall.

But I do remember that story Michael Keaton told…because I wrote it down in my journal.

For some reason, it stuck with me and, to this day, I can picture where I was sitting, what I was wearing, and with whom I watched it.

The Power of Daily Writing

That’s the funny thing about keeping a journal. It doesn’t have to make sense. It doesn’t even have to follow some chronological order. It can be whatever is on your mind—good, bad, or ugly—when you sit down to write.

In “The Power of Daily Writing,” the Wall Street Journal tells a story of a 78-year-old man who began to write in 1964 because he had long dreamed of writing a novel, but…well, life.

So he opened a notebook one day and wrote:

I have decided to be a writer. I will it, thus: I am a writer. Now—by definition if for no other reason, writers are distinguished chiefly by the fact that they write. I must write—two hours a day until I finish school.

Today, he has nearly 30 million words that he’s written about things as mundane as a trip to the Goodwill or things that could be hurtful to his family should they read it after he dies.

(He claims he’s going to go through and clean all of that up before he dies so no one is hurt when they read it all.)

But he writes every, single day and, kind of like brushing your teeth, he feels not-quite-right if he skips a day.

James Pennebaker, a psychology professor at the University of Texas and author of several books including “Writing to Heal,” says that is because writing every day is very powerful:

Taking 15 or 20 minutes to write freely about emotions, secrets, or upheaval can be a powerful tonic. Writing privately about traumatic experiences, even for as few as four consecutive days, can reduce stress, help people sleep, and improve their immune systems.

I presented a little foreshadowing in the comments of yesterday’s blog post on the fear of failure.

That resonated with Karen Wilson, who said she’s been keeping a journal recently and has seen a big shift in her mindset. 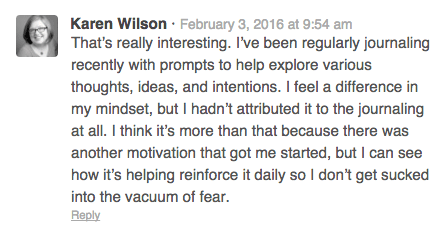 The experts say that is due to the practice of keeping a journal and she’s experiencing something that is not only stress-reducing, but is very powerful in how she approaches challenges in her life.

The experts also say that blogging doesn’t necessarily count because we choose the right words and the right stories because we know it’s going to be published for the rest of the world to potentially see.

The real magic comes when you write whatever is on your mind and keep it to yourself.

It’s embarrassing to look back and see what you wrote about when you were 15. Man, life was so simple, but it seemed so hard!

It’s embarrassing to look back and see what you wrote about even a year ago, when you thought you’d never be able to pick yourself up, dust yourself off, and keep going.

But it’s also very, very powerful to do that.

Because you did pick yourself up, dust yourself off, and keep going…even though how you felt at the time still gives you a knot in the bottom of your stomach.

It’s also kind of amazing to read some entries and think, “I remember feeling like that was a terrible year—and it was, but look at where we are today because of it.”

The practice of getting your thoughts out of your brain is powerful enough, on its own, but also take the time to read some of what you wrote so you are reminded of what you’ve overcome and accomplished.

Now the floor is yours. Do you journal? Have you ever done so? And, like my Michael Keaton story, what memories are conjured when you go back and read some of the things you wrote?