A couple of weeks ago, the Brit Awards, which celebrate musicians and their art, aired.

This year, the Grammys-like event is sponsored by Mastercard, which isn’t hard to figure out, considering their name is plastered all over the site.

Including the biggest award: Mastercard British Album of the Year awarded to Arctic Monkeys’ “AM.”

One would think that level of sponsorship would be enough.

One would be wrong.

Journalists seeking accreditation to the Brit Awards were happily granted access…with just one catch: They had to mention Mastercard in all of their pre, during, and post-event coverage.

Here is the email that went to journalists to confirm their access, transportation to and from the event, and suggested tweets and Mastercard mentions in their stories. 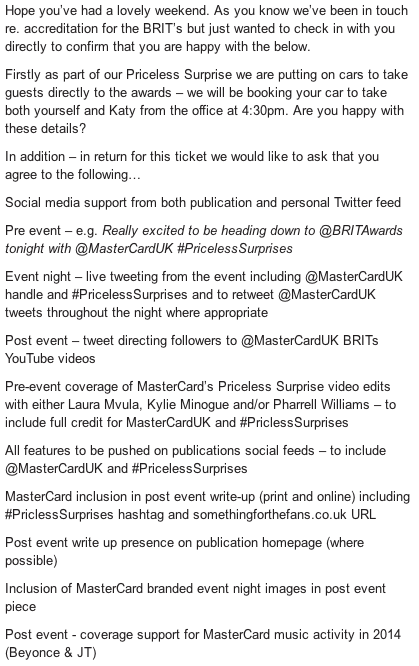 Gifts in Exchange for Coverage

“In return for this ticket, we ask that you agree to the following.”

Hello, 1980? This is 2014 calling. We’d like you to retire. Giving journalists something in exchange for coverage is not only unethical, it’s against the law.

Joe Thornley and I were talking about this and he mentioned it’s not against the law in Canada (though it should be), but it is considered unethical. Which likely means the same for the U.K.

But that didn’t stop the journalists who received this email from sending tweets, using the hashtag #PricelessSurprises. 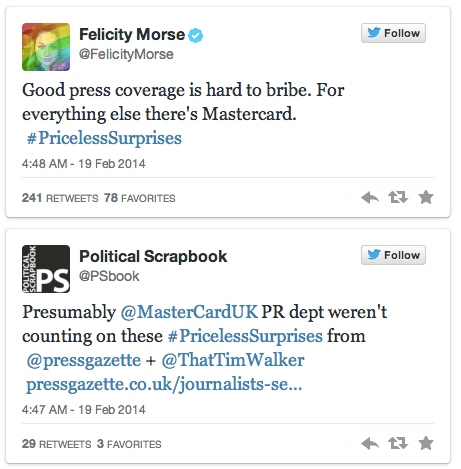 Tim Walker, from the Telegraph Mandrake, is the one to have first released a copy of the email. He describes journalistic ethics and why asking for something in exchange is a big no-no.

If they are going down that route they should really take out an advertisement. Going to the extent of drafting you a pro-forma Twitter message shows the extent  to which Twitter is being polluted by all this sort of stuff.

How the PR Firm Reacted

The PR firm, House PR, had the opportunity to respond.

The role of the PR agency is to pursue all coverage opportunities on behalf of its clients. This includes providing accurate brand references from the outset, for use across all platforms. It is a two-way conversation between the journalist and the PR in order to reach a mutually beneficial outcome. Editorial control always remains with the journalist.

Yes, it is a two-way conversation. Yes, editorial control remains with the journalist.

And it also against journalistic ethics to suggest they do anything for you or your clients in exchange for anything.

The law in the United States says, if you receive accreditation from Mastercard, you are to disclose it. So the company would get a mention, regardless. But to suggest tweets and the types of things to include in their event coverage? Wrong. Just wrong.

Some of the critics think this was all planned – even going so far as to call it a Masterstroke – and perhaps it was. After all, everyone is talking about the credit card company outside of the Brit Awards.

I prefer to believe in the humanity of people and think this was a mistake made by a passionate and eager-to-please young professional at House PR.

There is a difference in how you work with journalists and in how you work with bloggers. If I were being sent to an awards show, I would appreciate knowing exactly what the PR firm expected of me. At that point, I could decide whether to accept or decline…depending on how it would affect my readers and whether it would come across as disingenuous.

But journalists are a different beast. You have to have a completely different approach.

If you’re on the digital team that doesn’t have PR pros on it, talk to your PR peers about what is right and what is wrong (hint: Never ask a journalist to do anything in exchange for what you’re giving them).

If you’re a PR pro and you don’t already know this, learn it and learn it quickly.

The FTC requires disclosure and it’s rare – particularly at newspapers in the U.S. – that you can give journalists anything, anyway.

Gone are the days of buying them lunch or sending holiday gifts or taking them on an all-expenses paid media tour to your client’s offices.

Let the media relations work its magic without bribery or persuasion.