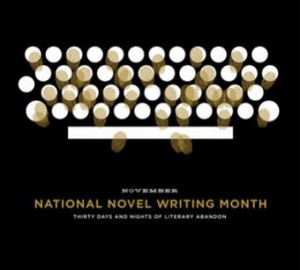 I have been prepping for today since August.

Well, I let Debra Caplick talk me in to (challenge me?) participating in NaNoWriMo.

It’s National Novel Writing Month, which gives you 30 days to write 50,000 words. And it starts today!

You also can’t submit anything you’ve already written. You have to start from scratch. The only thing you can have done before today is write an outline and do your research.

So the outline, characters, plot, and initial research is in a notebook with a bicycle on the front of it. Some of you have likely seen me carrying it around, protecting it more than my pretty red Moleskin (where client/work stuff is written).

Here are the rules:

You have 30 days to write a full book of fiction, which (admittedly) is much better than the guys who wrote Execute in one week (er, the goal was a week, but they did it in eight days).

Between prepping the business for our best year ever next year, continuing to write here every day, taking two trips outside of the country, and Thanksgiving, this should be a pretty good challenge.

I’ve had the book swirling in my head for a good four months so I’m ready to get it onto paper. If I accomplish it, Erik Hare is going to give it a good first edit and then we’ll find a publisher.

Besides Debra, I know Michael Schechter and Brent Carnduff also are participating.

It’s not too late to join the party, if you’re so inclined. If you’re participating, let us know so we can all cheer one another one.