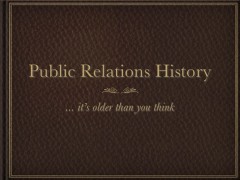 Consider this: The public relations industry might have begun in 1800 BC.

Back then, the Babylonians used stone tablets to educate farmers on how to sow and harvest crops.

In Egypt, scribes documented the deeds of the pharaohs; in Rome, leaders, such as Julius Caesar, wrote biographies to persuade the public to support their political aspirations.

There are numerous examples of persuasive speaking, the art of rhetoric, reputation building, and mediating between rulers and subjects.

Among the most famous was the use of public relations to promote Roman Catholicism during Europe’s Counter-Reformation. Pope Gregory XV coined the term “propaganda” when he created Congregatio de propaganda fide (Congregation for propagating the faith), which trained missionaries to spread Catholic doctrine in the face of rising Protestantism. The term did not carry negative connotations until it became associated with government publicity around World War I.

Edward  Bernays, the father of public relations and nephew of Sigmund Freud, worked on the women’s cigarette smoking campaign in the 1920s. He helped the cigarette industry overcome a social taboo: Women smoking in public.

His campaign? He persuaded fashion designers, charity events, interior designers, and others to make the color green trendy. Because a pack of Lucky Strike cigarettes was green, women would be more likely to carry them because the color was fashionable.

He is reported to have said, “The three main elements of public relations are practically as old as society: Informing people, persuading people, or integrating people with people.”

It’s no wonder the industry has the perception of being full of liars and spin doctors.

The official definition of public relations, as redefined by PRSA in 2012, is: “Public relations is a strategic communication process that builds mutually beneficial relationships between organizations and their publics.”

But try to explain that to someone not in the industry and it goes above their heads (heck, I’m not entirely certain what it means).

People understand what is tangible; media relations—when a story runs in print or airs on television or radio about you, your company, or your product or service—is easy to understand. You can see it, touch it, feel it. It’s not something that feels like magic so it’s often what is thought of when explaining public relations.

The truth of the matter is, while media relations is an important part of a communications program, there are many other tactics used in a cohesive strategy: Content, email marketing, social media, crisis and reputation management, events, social advertising, investor relations, lobbying and regulatory work, and more.

The Industry Has Changed

Hollywood has not been kind to the PR industry. Wag the Dog depicts a “spin doctor,” (played by Robert De Niro) who distracts the public from a sex scandal by hiring a film producer to construct a fake war with Albania.

Samantha Jones of Sex and the City fame was a publicist who threw elaborate parties and spent her evenings club hopping from fabulous event to fabulous event.

And reality TV star Lizzie Grubman did the work of celebrity publicists in Manhattan while the world watched. She and her team of assistants planned nightclub openings, launched albums, and mingled with celebrities and the media.

It’s no wonder when interviewing soon-to-be college graduates, you hear reasons they want to go into PR that run the gamut from, “I’m good with people” and “I love to plan a party” to “I’m a night person” and “My family doesn’t mind if I go to events and clubs with clients.”

However, if you run an organization, are on the executive team, or have (or need to have) communications professionals or a firm reporting to you, it’s time to prepare your business for a marathon.

You should build a communications program that can withstand the constant changes at Google.

You should consider how ethics may not get you short-term results, but will provide a long-lasting  effect.

Learn how the lines between marketing, advertising, digital, and PR are blurring.

And figure out what to do when negative criticism happens online (and it will).

Though academics credit the PR industry for being around since 1929, it’s pretty much remained the same for more than 70 years. The real changes came when social media took hold of organizations and changed the way we communicate forever.

It’s time to understand those changes, be willing to do things differently, take some risk, and beat the competition.

You can do that with PR.

A highly modified version of this first appeared on the VXSuite blog.