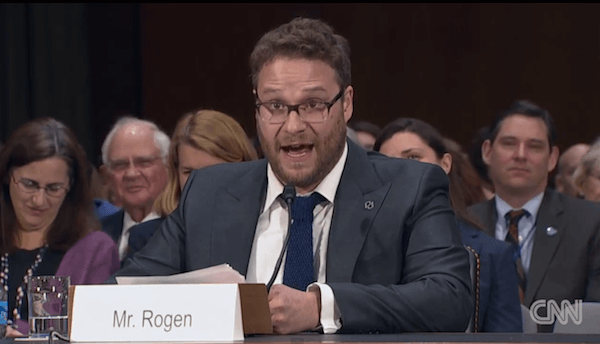 Get ready for some PR takeaways, Hollywood style.

Imagine being in a situation where you have the opportunity to give a presentation about something you care about.

It’s a presentation where you are speaking on behalf of people who truly have no voice.

You’re prepared to give this presentation to 18 people. You’ve blasted it all over your social media channels. You’re pumped and you’re ready…

And only six people show up. When the person presenting before you finishes, four of the audience members leave.

Now you’re down to two listeners. What do you do?

This happened to actor Seth Rogen at the Senate Subcomittee meeting on February 27th.

Rogen was scheduled to present to senators about Alzheimer’s disease.

At one time, he, like many others, believed a common misconception of the disease – it’s when “old people forget where they put their keys.”

It wasn’t until his mother-in-law was diagnosed with early onset Alzheimer’s that he saw firsthand the devastating effects of the disease.

He watched the once vibrant, active woman slip from her family – unable to speak, to feed herself, dress herself, or use the restroom by herself. He became a coach to his wife, Lauren Miller, while she painfully watched the mother she loved suffer before her.

Fast forward several years later when Rogen and Miller launch the Hilarity for Charity fund through the National Alzheimer’s Association.

Rogen designed the charity around comedy in an effort to engage a “younger population,” and he stuck with this theme in his February speech to the Senate Subcommittee.

Unfortunately, as you now know, the speech didn’t go as well as he had planned. But this high-profile situation gives us two big PR takeaways.

Rogen’s speech was laced with humor, but his audience (the senators) isn’t known for having a sense of humor.

I’m not sure this strategy worked the way he hoped.

In Rogen’s speech, he sets the tone by stating he knows he isn’t at a hearing “about legalizing marijuana,” alluding to his role in the movie Knocked Up. He continues his speech with important information, but also includes what may have been a few too many jokes.

Another issue? He read his speech. If he had memorized it, he could have made more eye contact throughout, better engaging with his ‘not amused’ audience.

While he was there to support an important cause, the comedic undertone and lack of engagement with the audience seemed to water down the content.

It may have been better to see him give a completely serious presentation of ideas that related to the senators on their level – something you wouldn’t expect given his history as a comedy actor.

When You are Placed Under Scrutiny, Own it

This leads to another takeaway.

In a brief exchange on Twitter (since deleted), Rogen reaches out to @SenateApprops and vents his frustration about having such a low turnout.

Below is the exchange captured by The Wall Street Journal. 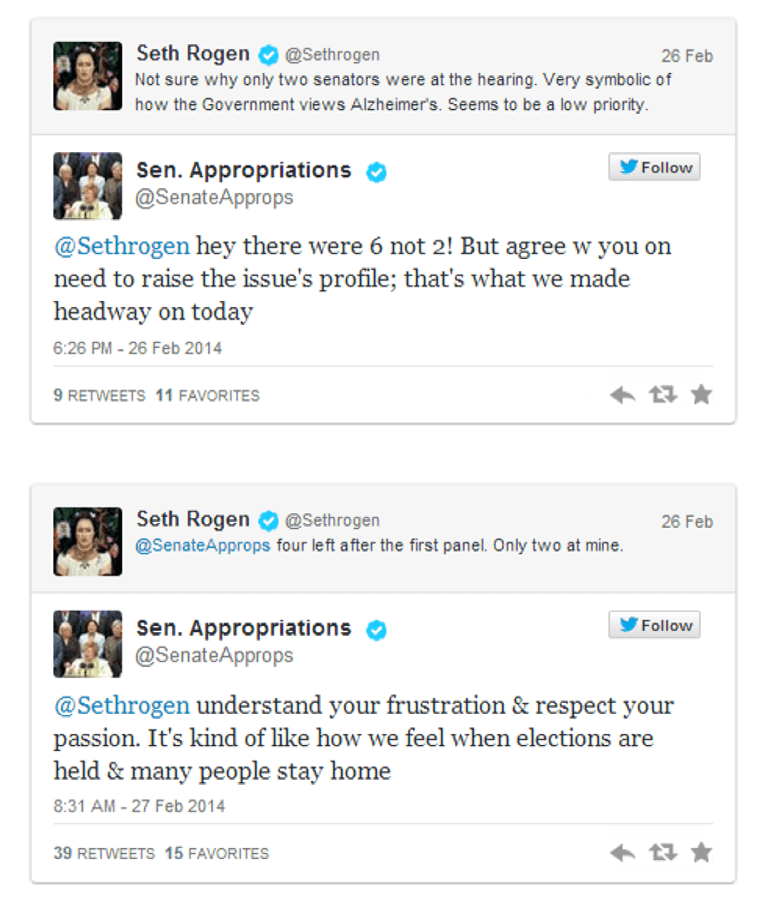 Oh no they didn’t!

Doesn’t this exchange simply prove Rogen’s point that Alzheimer’s just doesn’t matter to the people with the power to do something? Where is the empathy for this devastating disease?

The PR team should have apologized for the low turnout, and offered to aggressively promote the story to ensure it is heard by those who need to hear it. They should have thanked him for his time and commitment, and not made a snarky “We hear ya, buddy!” comment. Period.

We can make amendments for our poor behavior, but there will always be a record of it somewhere – just like these tweets.

Regardless of a few PR hiccups, Rogen’s presentation was successful. He was able to draw attention to the need for research, and he reached a young demographic, which were his original goals with his charity.

It’s admirable he has taken to support Alzheimer’s. It shows that despite being a self-proclaimed man child, he cares about important issues.

Jo Lynn Deal is the founder of myMarketing Café, a marketing consulting firm and online resource center for small business owners. She is accredited in public relations.

Using Trust Signals to Build, Grow, and Protect Your Brand

Five Things I Learned About the PR Industry: A Tech’s POV