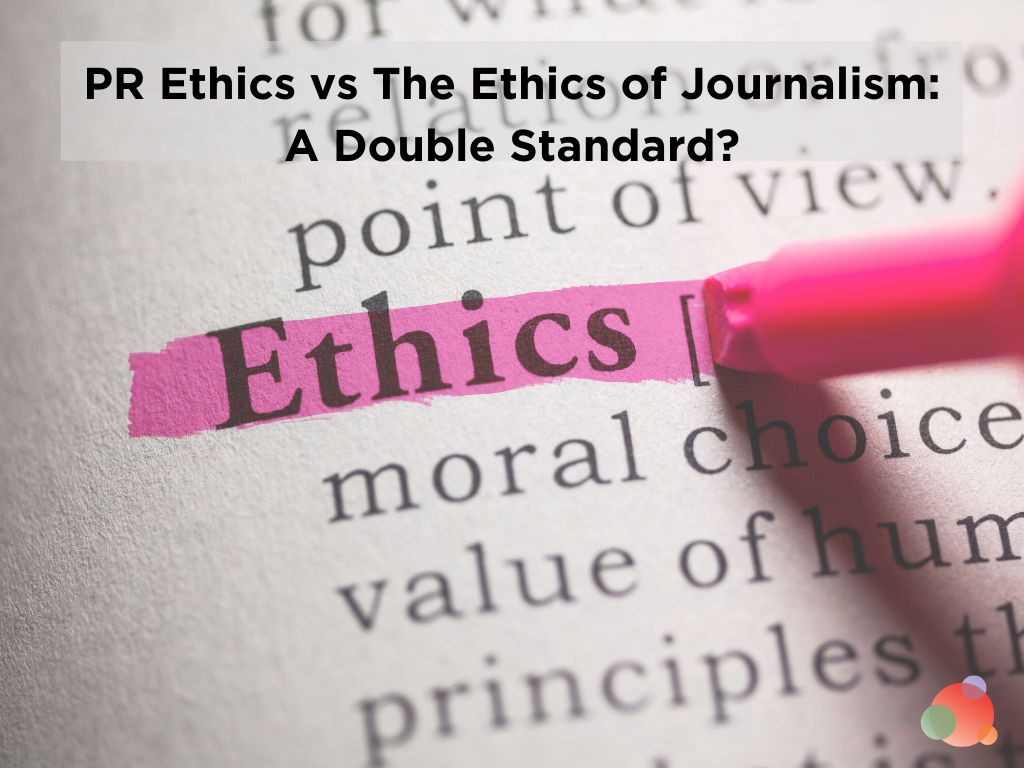 It’s no secret journalists have a jaded view of public relations.

Some of that is due to their perception of PR ethics—or lack of them.

While I believe the majority of PR professionals operate with high ethical standards, many communications programs still tread perilously close to or cross the ethical line.

Here are a few notable PR ethics fails brought to light by journalists (and rightfully so):

Of course, you can read about other PR ethics breaches in Spin Sucks (the book).

All of these shed a negative light on communications.

And reinforce the need for a more formalized approach to PR ethics and the way we make decisions.

According to our friend Michael Meath, interim chair of public relations and a professor at the S.I. Newhouse School of Communications at Syracuse University, who also developed and teaches several strategic ethical decision-making and crisis management courses (and was my prof):

Sound ethical decision-making comes down to balancing our personal frame (how we were raised) with systematic methods used to act upon what we believe is right. This decision may be based upon a sense of duty (obligation), serving the best outcome for the most people (utilitarianism), or doing what is best for ourselves (utility).

All business activity is human activity…and we need to keep that in mind even as we now grapple with technology (like AI) and it’s place in our now human decision making.

Yet, who in an organization determines what constitutes acceptable PR ethics and ethical behavior?

Should senior communicators be responsible for setting and administering PR ethics policy?

And when should PR folks blow the whistle on their organization’s own ethical failures if those failures undermine public interest?

None of these questions has a simple answer.

But ethical decision-making offers a starting point grounded in a system or process.

Which brings us to the inaugural Global PR Ethics Month that’s happening in February under the auspices of the Global Alliance for Public Relations and Communications.

The Global Alliance, an international partnership of PR industry organizations including PRSA, CPRS, CIPR, and others represents more than 280,000 practicing professionals.

It is committed to raising the bar on the way public relations is practiced around the world by providing policies, leadership, and guidelines.

That’s why they launched a worldwide ethics initiative:

The campaign #EthicsMatter will bring attention to the importance of ethics in communication in all areas of business, government, non-profit and education, and showcase all that our members are doing to educate and empower public relations professionals.

The Global Alliance also developed 16 Global Ethics Principles, including: “integrity, transparency and disclosure, honesty and truth, and fact-based communication” to name a few.

Of course, PRSA also has a Code of Ethics.

And the Canadian Public Relations Society has a Code of Professional Standards.

I encourage you to read both carefully as they provide a framework for maintaining high professional standards.

Naturally, this starts with the individual practitioner and their commitment to PR ethics and ethical decision-making.

Along with that comes a formalized approach, led by the industry organizations, with sanctions for members who don’t abide by the rules.

Of course, in most of North America, we don’t have true consequences for PR ethics breaches…yet.

Communications professionals can choose to ignore the principles, code, or standards.

That is, unless said pro is called out by the media.

And in my opinion, that’s a necessary and justified response.

But What If the Shoe Is On the Other Foot?

I have a question.

Should we hold journalists to the same high ethical standards they have for us?

If we find an abuse on their part, what’s our best course of action?

I say this because last week my blood began to boil when I came across an ad in the Globe and Mail for one of their newest products.

They were hawking a 10-day cruise through the South of France and the opportunity to travel with some of their top editors and columnists.

What did they offer?

Does that sound a little shady to you?

After digging a bit further, I discovered they created a website to promote the jaunt.

Where they were even more overt with their choice of words:

Well, the individuals being paraded out like so many celebrity spokespersons included the publisher, editor in chief, op-ed editor, political columnists, and other high profile writers.

Of course, you need to make your way to France, and pay for all the sundry expenses…

Is this a joke?

Surely, it can’t be true!

A Week Later and Not One Critique

I’ve been searching for criticism of this tier-one media all-access pass and I haven’t found any of the Globe and Mail‘s venerable competitors calling them out on this offer.

Now, I understand journalism has taken a huge revenue hit in recent years.

And I realize the importance of looking for alternative revenue sources.

But paying big money for a private event in another continent far from the eyes of any watchdog?

That strikes me as one of the worst forms of bad judgment.

Not only that, but it came from the same paper which called out the Canadian Prime Minister for offering access to top Liberals at party fundraisers.

There seems to be a double standard at play.

What About Journalistic Ethics?

According to the Canadian Association of Journalism Ethics Guidelines, journalists:

Um…it seems like this access on a cruise idea kind of goes against these principles in a pretty fundamental way.

I think someone needs to throw the Globe and Mail an ethics lifejacket—and fast.

Every business needs to make a buck.

With all the upheaval media has faced in the past few years, I don’t blame them for being creative and trying something new.

And I’m sure the sinister type of “access” was not at all their intention.

But the perception is there.

And as we all know, perception can become reality.

That’s why those of us in the news and information business need to be doubly vigilant.

With so much disinformation, fake news, deep fake videos, or simply the implication of deep fakery, PR must take responsibility for its ethical behavior.

And so does the media.

In fact, maybe there’s a new opportunity for an open collaboration between journalism and PR.

This seems especially important in a world where the lines between paid, earned, shared, and owned media continue to blur.

If we want to build trust with audiences, transparency, truthfulness, and ethics are all we have.

What’s your approach to PR ethics?

Does your organization have an ethical decision-making process in place?

What do you think the consequences should be for an ethical breach on either the PR or journalism side?