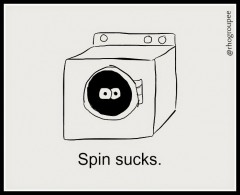 I typically wouldn’t mention it, except I couldn’t sleep last night because I can’t breathe. Rather than watch another episode of Law & Order, I decided to write today’s blog post at 1 a.m.

It started off with a princess living in a castle in a faraway land with her father, the king.

The king was an ethical man. Someone who all of the villagers admired and respected.

He had a downfall, though. The wicked witch, who lived in a neighboring village, called his ethics into question.

The king was Richard Edelman, the wicked witch was a journalist for the Financial Times, and the princess was me.

But when I read the post a mere four hours later, it was dumb. It seemed like a good idea at the time!

The genesis of the blog post is still good, even though the execution was terrible.

In a recent story called, “Publicity is Free with No PRs,” Jacobs details the reasons many executives do not hire PR professionals.

Of course, the creme de la creme is when the communications director said,

It goes on to say that PR flacks are notorious for bringing on good clients and then handing the account “off to a child,” that we don’t understand our client’s businesses, or the good news never “filters through to the media.”

Richard Edelman responded with “A Fundamental Lack of Understanding.”

He addresses the four executives and their naysaying with four points of his own.

The PR Industry is Somewhere in the Middle

As this blog and the new book – Spin Sucks – details, we are not spin doctors.

It saddens me to know a man I greatly respect thinks our industry is full of liars and truth spinners. Perhaps I’ll send Buffett a copy of the book!

Here is a breakdown of the middle I see between both:

But here is the biggest miss of both articles: PR isn’t just media relations.

PR is More than Media Relations

All of these “PR pros suck” articles always focus on the media relations aspect. They focus on the bad pitches they receive from so-called PR pros. And they’re right to do so…that’s what they see every day.

But what we do is so much more than that.

Today we create content, we build relationships with external audiences – including customers, we build your reputation, we have the hard conversation when something you’re about to do is going to hurt your reputation, we manage an issue…and the possibility of an ensuing crisis, we work with investors, we produce and host events, we generate leads, we convert customers, we even dabble in some advertising.

As my friend Rebekah Iliff likes to say, an entrepreneur or CEO absolutely can do those things and probably fairly well. But is that where he or she should be spending their time?

She says no…and I agree.

Spend time where you have strengths, but be very clear on what your PR team should be doing and how they integrate all forms of media.

If you know what you’re trying to achieve – beyond “get me on the front page of the New York Times” – you can leave the strategy development and execution to the pros.

Thanks to James Halloran for bringing Edelman’s blog post to my attention and to Rosemary O’Neill for the cartoon.