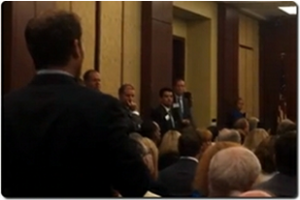 I was reading my friends over at PR Daily yesterday and what did I find, but a story about a PR guy (I can’t even call him a professional) who locked a reporter in a room so he was unable to ask his CEO any questions.

Yes, you read that correctly. He locked the reporter in a room.

But it’s not just any CEO. It’s the CEO of Honeywell, a Fortune 100 company. A publicly traded company. A seemingly very powerful company. A company so powerful, in fact, it’s CEO doesn’t have to answer any tough questions.

Mike Elk, a reporter for In These Times,  was attending a public meeting in Washington, D.C. last week , where Dave Cote – the Honeywell CEO – was asked about labor issues at their uranium conversion plant in Metropolis, Ill.

I had no idea where that is, so I looked it up. I learned it’s the home of Superman and near the Kentucky border. Now converting uranium makes sense. They’re trying to save Superman!

In all seriousness, it looks to be pretty bad. Apparently uranium was released into the atmosphere. Which is bad enough on its own. But it was caused by a non-union engineer who was performing the job of a union worker.

So Elk asked Cote about this release and their labor practices and, rather than saying they were there to discuss how to lower taxes and not to talk about that plant, Elk had the microphone ripped out of his hands. 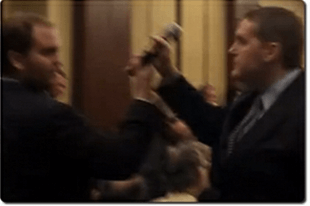 But it doesn’t end there.

In Elk’s own words (you have to read it to believe it):

After the panel ended, I went up to Cote and told him “I want to talk you about Metropolis, Illinois.” Cote immediately ran out a fire exit with an entourage of people following him. An unidentified man who was with Cote blocked the fire exit and shoved me as I attempted to walk through it. I informed him that this was an illegal to block a fire exit like this.

I saw another fire exit that was nearby and ran through it to find Honeywell CEO David Cote in a room behind the set of doors. Upon seeing me, Cote and his entourage immediately began to run away and quickly exited through another set of doors. I attempted to follow Cote through that set of doors, but was blocked by the same unidentified man and another man, whose nametag identified him as Honeywell External Communications Director Rob Ferris.

Ferris barricaded me in the room for several minutes and atferwards had the Capitol Police detain me. They released me after 10 minutes when they realized I had done nothing more than try to follow a CEO down a hallway.

What Should Have Happened?

Rob Ferris is a communications professional. This is not his first trip around the block. Surely he’s media trained his CEO.

There is a tactic in media training called blocking and bridging.

Politicians are notorious for using it. You see it when they say something such as, “We’re not here today to talk about that, but what I can tell you is our healthcare package serves all people.”

Athletes and celebrities accused of wrongful doing are also very good at it, “I’m not here today to talk about that, but what I can tell you is my latest movie made $16 gazillion dollars.”

Of course, you eventually have to answer the question of your policies or your drug use or who you’re dating or of groping other men, but you can do it in on your own terms, not that of the reporter.

Cote should have let Elk finish his question and then responded with, “Mr. Elk. Thank you for your question. We’re not here to talk about that today, rather about how to lower taxes.” And then gone on to talk to his key messages, which I only have to assume he had.

If Elk is the reporter he seems to be, he’d have asked the question again. And Cote could have repeated his response.

THEN someone from his communications team could interrupt and say they’ll schedule a separate call to discuss his questions later and move on.

If they’d done that, this would have been a non-story. Sure, Elk would have been mad. And the people in the room would have wondered what was going on. But there wouldn’t be pages of results in a Google search condemning Rob Ferris.

But to grab the microphone from his hands and then run away from him while your team barricades him a room?

And, of course, in today’s digital age, there is video of Elk trying to ask his question and having the microphone ripped from his hands, which you can find below or by clicking here.