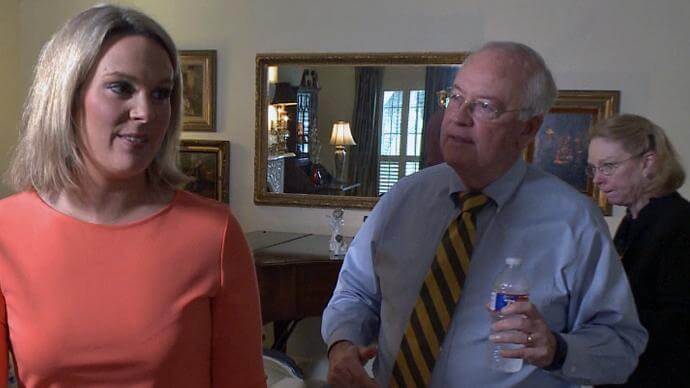 There comes a time in every PR professional’s life that an interview goes off the rails and you have to stop it.

It is your job, after all, to protect your client or executive sometimes from themselves…and certainly from something that could end up really damaging.

There is a clip of Robert Downey, Jr. doing an interview for the upcoming release of Ironman and, at the six minute mark, he looks off camera when the journalist begins asking about his past.

It’s clear the journalist was straying away from what was agreed upon and trying to sneak in some questions about his sordid past, most likely in an attempt to get something juicy.

You hear his publicist say, “Okay, thank you” and RDJ gets up and walks away.

At that point, RDJ, the journalist, the sound guy, and the publicist are all on camera, as the star pulls his mic off and they walk out of the room, with the journalist pleading for them not to leave.

Though it’s awkward and it became part of the 24-hour news cycle for a day, the story was about RDJ walking out of the interview, not about the publicist stopping it.

A PR Professional Should Never Become the Story

We have a client who has a three-way approach to crisis communications: Tier one, which could be damaging to the brand; tier two, which has social media mentions starting to go awry; and tier three, which has the brand becoming the story.

As PR professionals we never want to become the story.

But we should never, ever become the story.

Unfortunately a very experienced, very sophisticated PR professional became the news nearly a week ago when she interrupted an interview her client, Ken Starr, was in with KWTX News in central Texas.

Starr, as you may remember, was the lead counsel during the impeachment trial of President Clinton and he now is the former chancellor and president of Baylor University in Waco, Texas.

He resigned while allegations run wild about the university’s rape culture and an environment so “toxic that women who reported they were assaulted were put through hell.”

Presumably, he resigned so he can freely about what happened—and I imagine so he can save his reputation and begin a PR image campaign.

The Interview, In a Nutshell

Here is what happened:

During the interview, Julie Hays asked him about an email from a woman who said she was raped by former Baylor football player, Tevin Elliott.

The subject line was “I Was Raped at Baylor,” and it was sent to several people, including Starr.

Hays, being a journalist and trained to ask the tough questions, asks him about that particular email.

What about the victim who came forward saying she had personally sent you an email and Art Briles an email saying in the subject line that she was raped at Baylor. Did you ever see that email?

I honestly may have. I’m not denying that I saw it.

And then there is commotion that begins to happen behind Hays.

She continues to talk to Starr, but you are distracted by what is happening off-camera.

You don’t have to wait long, though, because you hear Merrie Spaeth—who worked in the Reagan administration and worked with Starr before his testimony in front of Congress about the impeachment—say:

She’s on camera briefly as she pulls Starr off camera and out of the room.

They soon return and Spaeth tells Hays she can ask the question again.

All I’m going to say is I honestly have no recollection of that.

And then it gets even worse.

After he says that, he turns to Spaeth and says:

You hear her say:

Don’t look at me. Look at her.

So Hays asks the question for a third time.

This time he says:

And, by this point, everyone is freaking out, including you and me and everyone else watching.

I really can’t do it justice in text so take three minutes and watch it. I’ll wait.

Merrie was a producer for ABC’s 20/20, a speechwriter for the legendary founder and chairman of CBS, William S. Paley, and was assigned to FBI Director Judge William Webster while serving as a White House Fellow. All of this culminated into her roles as director of public affairs for the Federal Trade Commission, and ultimately her appointment as director of media relations at the White House in the Reagan Administration.

So she’s no slouch and certainly knows exactly what she’s doing.

Most likely, the way Starr answered the question the first time was against legal counsel advice and could probably get him in a lot of trouble.

She did her job when she asked the news director to not include that question and answer in the piece. When he refused, she also did her job by interrupting the interview.

What should have happened, though, is the interview should have ended. They should not have come back in the room and answered the question two more times.

Instead, his PR professional counsel has become the story, which is tier three, fire alert crisis.

There comes a time in every PR professional’s life that an interview goes off the rails and you have to stop it.

It might be because the journalist is trying something unethical.

It might be because your spokesperson answered a question the attorney said was absolutely unacceptable.

Or it might be because you see 17 steps ahead and already know the damage that was just created that can’t be undone.

Whatever the reason, be professional about it, don’t lie, don’t try to coach your spokesperson to say something differently and go back into the room, and—most importantly—don’t play into the spin doctor image.

And did I say don’t lie?