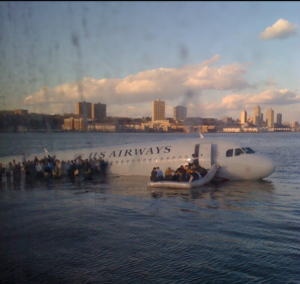 I’m sure most of you remember when the plane went down in the Hudson River.

Do you also remember the photo that accompanied most of the news reports?

It was the image to the left, which was tweeted by one Janis Krums, who was on the ferry crossing the River when the plane landed and he tweeted a photo of it.

This is when Twitter became a household name and it fundamentally changed the way we communicate.

You see, the news was not only reported by a citizen, but it was accompanied by an image. And it spread like wildfire on Twitter before traditional media had a chance to even get to the scene to begin their reporting.

This is also when you began to see the ticker along the bottom of television news reports that says something along the lines of, “This is being reported on Twitter, but has not yet been confirmed.”

These combined studies showed 80 percent of journalists and bloggers value images that are easily available and ready to use. And 75 percent says they want video and that 30 percent of their websites now use externally produced video.

Those are a lot of percentages so I want you to think about that for a second.

Eighty percent of journalists you’re working with in your media relations efforts want images and nearly that many also want video.

Are PR Pros Keeping Up?

But PR pros are not keeping up. At least, not according to the PRESSFeed survey that asked 100 (small number so take it with a grain of salt) PR pros if their activities lined up with what journalists wants.

The survey discovered only four percent said they thought images were important to journalists and just a little more than half (56 percent) routinely add images to their media relations efforts.

And only eight percent said they thought a video gallery is important to journalists, with only 39 percent making video available through a company newsroom on the website.

Even though the number of PR pros surveyed is small, what I like best about the study is PRESSFeed also reviewed the company sites of  300 companies – the Fortune 100, 100 of the Fortune 500, and the top 100 of the INC 500 – to see what features and tools they provide for journalists.

Only 24 percent of the company sites offer images and 22 percent offer videos.

What Does this Mean?

The study also found only 14 percent of the news releases posted online are optimized for search.

The industry is not keeping up.

Journalists are looking for images and videos and only a quarter of us are delivering.

Are we so focused on the way things have always been done that we’re forgetting about one of the key stakeholders in our communications programs?