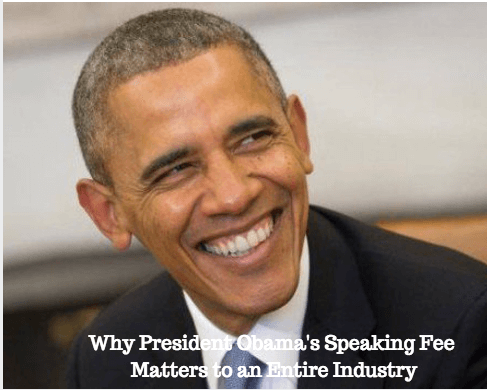 President Obama has been offered $400,000 to speak at a health care conference for Cantor Fitzgerald, a Wall Street banking and brokerage firm.

A former U.S. president making money off his experience?

That is the sentiment of many, including the typical left-leaning The New York Times and others, such as The Wall Street Journal.

And the comments of people (I know, I know…you’re not supposed to read the comments) range from, “Doesn’t he have enough money?” and “Obama does not need the money and should not accept it” to “Obama the hypocrite.”

The New York Times editorial has this to say:

Is it a betrayal of that sentiment for the former president to have accepted a reported $400,000 to speak to a Wall Street firm?

Perhaps not, but it is disheartening that a man whose historic candidacy was premised on a moral examination of politics now joins almost every modern president in cashing in.

And it shows surprising tone deafness, more likely to be expected from the billionaires the Obamas have vacationed with these past months than from a president keenly attuned to the worries and resentments of the 99 percent.

He has experience only four other people in this world have.

Why wouldn’t he deserve to make what the market will bear to pay him?

What Other Presidents Have Made Speaking

When President Clinton left office, he reportedly was paid $700,000—twice—to speak in Nigeria.

Hillary Clinton, former U.S. Secretary of State and former U.S. Senator, was paid $675,000 to speak at an event for Goldman Sachs.

Presidents Bush, Reagan, and Carter all made $50,000 or more per speech, after leaving office.

Even Rudy Guiliani and Sarah Palin pull down the big bucks—$270,000 and $115,000, respectively—for speeches given at the height of their popularity.

And why shouldn’t they?

We live in a democracy that values capitalism.

And people, no matter how much money they already have, deserve to be paid for their time.

Speaking for money is a very large industry.

Many people participate in it—journalists, influencers, professors, former politicians, consultants of all stripes.

Not to mention the people who work with speakers, such as speaking bureaus and agents, to place them at events for all sorts of industries.

Many of us, myself included, participate in this industry.

The fees, just in the marketing space, range all over the place.

Those who work for large corporations—aren’t allowed to take speaking fees.

Others, like me, make a mid-range fee, while pursuing other revenue streams, such as books, online courses, and client services.

This is the way it works: The more in-demand you are, the more someone values having you at their event.

Because you’re a name that will draw a rabid and engaged fan base, you will help the event producers sell more tickets.

And, because the event will sell more tickets, the more likely it is they’ll make up—and then some—the speaking fee.

If your event budget has $50,000 to spend on a speech, you might hire the likes of Scott Stratten or Malcolm Gladwell.

If you have $5,000 or $10,000, you’d settle on someone like me who is less well-known in the bigger market, but has a very engaged community in a certain niche.

There are only so many former presidents…and only so many people who have name recognition by every single human being in this world.

In the case of Cantor Fitzgerald, they’re fairly confident they’ll make a profit on having President Obama speak at their event, so it’s easy for them to pony up the fee.

Every ticket they sell will be to people who know who President Obama is and cannot wait to be in the same room as him.

His name, alone, will make money for the brokerage firm.

But there is a larger issue at play here.

Let’s say he gives into the critics and decides not to take the fee.

Now Cantor Fitzgerald has a surplus of $400,000 in their budget, plus the profit they were planning to make.

(Not to mention the gads of publicity they’re getting as everyone debates this.)

They could quite possibly be up $800,000 to $1MM because President Obama still is their headliner—and they still will make buckets of money—but they no longer have to pay him.

Which means, his agent, whose livelihood is based on how much his clients are paid, makes zero.

Which means we could also end up making zero.

The entire industry begins to suffer, and eventually dissolves, all because a former president has decided to donate his time when he speaks.

Of course, that’s running 600 steps ahead and it’s not likely to happen, but it is something to consider.

If President Obama will speak for free, the conversation becomes, “Well, we can get Obama for free. Why should we pay you $10,000?”

Or, “We don’t have a budget because we were expecting Obama, but had a last minute emergency. Can you do it for the exposure?”

Minus the “We can get Obama for free” comments, these things already happen.

We live in a capitalist economy where things are valued, but people’s time is not.

And it is because there are big names who will speak for free.

There are organizations that don’t allow their employees to take a fee.

And there are some up-and-comers who will do it for free to build their portfolios.

Which means there isn’t an industry-wide value placed on people’s brains.

So yes, President Obama should make $400,000 to speak at an event for an organization that was not his friend during his presidency.

At the very least, it should be to support an industry that helps many of us keeps roofs over our kid’s heads.

At the very most, it should be to donate to charity, which he and his wife are so keen to do.