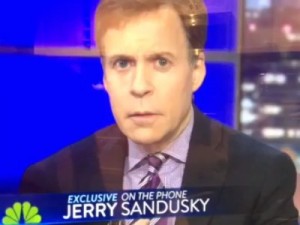 I’m thinking Spin Sucks should do a moron award…with a badge and everything (maybe Erin Feldman will create one??).

Last week we had Coghlan Consulting Group. This week we had Governor Brownback and Mayor Winder.

I learned about a PR guy in Arizona who tweeted about “midgets” and “special ed” persons…all while working with the Special Olympics.

Then I received an email last night of, what looks to be, another moronic move.

It seems almost too easy. But what do you think? A Spin Sucks Moron Award?

While we think about this, I thought enough time has passed that we can talk about the crisis that is Penn State.

A couple of weeks ago, both Barry Silver and Kevin Vandever posted pretty much the same question about what’s going on at the school.

The President of Penn State U calls late at night and says, “Tomorrow the PA Attorney General is going to indict and subsequently arrest a former assistant football coach and an honored PSU family member for multiple counts of sexual child abuse. Without admitting anything, I believe this is only the tip of the iceberg. Whatever the cost, how can you help PSU limit the ensuing stench to a decade, instead of PSU being stained for a century?” I can’t imagine a worse PR reaction than the reaction of PSU to this unconscionable disaster. Perhaps you can offer an alternate path.

And then, as if they were reading our Facebook wall, Penn State called Ketchum. Which is odd, because Ketchum isn’t known for their crisis work, but good on them. I wouldn’t want the job if they called me the day after Sandusky was arrested.

Because they had MONTHS to bring in PR counsel. The Harrisburg Patriot News reported on March 31 that Sandusky was the subject of a grand jury investigation.

THAT was when Penn State should have called Ketchum or any other crisis firm.

Instead, they waited until Sandusky was arrested and he made that terrible phone call to Bob Costas (I would have resigned the account right then and there; talk about a Moron Award) before they decided it was time to spend the money to help save their image and reputation.

Sure, the work Ketchum does now can help with all of the media requests. They can work with legal to get messaging approved. They can handle the phone calls and interview requests and strategically decide who gets to talk and who does not. They can even be on campus 24/7 to manage any of the spin-off crises that are sure to happen from all of this.

But now they’re in reactive mode and that’s a very bad place to be in a crisis.

Public relations won’t make the story go away…and it shouldn’t. But it can manage the backlash, the reputation and the image, and protect the school (or business).

My best advice? This doesn’t come from a selfish place because we do crisis work, but because it helps the business. Hire the PR firm as soon as you know something is going to go down. Even better if you have a crisis plan in place, just in case. An insurance of sorts. But I know the real world doesn’t afford everyone that luxury.

But don’t wait until the literal shit hits the fan. Be smart. Be strategic. And have a PR professional on speed dial when there is the slightest murmur that something is going to happen.