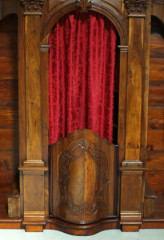 I never watched much trash TV or tabloid talk shows.

You know the ones, broadcast in the afternoons and hosted by the likes of Jerry Springer, Jenny Jones, or Montel Williams, with people who rant, yell, cuss, punch, and otherwise expose themselves (often literally).

And that’s just the audience! But one time…

I was doing entertainment publicity for Yuk Yuk’s, Canada’s premier chain of comedy clubs, and I was invited to a meeting with some comics I didn’t know.

Turned out they’d perpetrated a hoax on one of trash TV’s biggest stars.

It started because two of them didn’t believe the people they were watching on the show were real, and they wanted to prove it to the world. Related: Comedians have a lot of spare time.

So they called the program with a concocted situation and were selected to come on the show.

They flew to Chicago pretending to be a husband, wife, babysitter, and her boyfriend. In the scenario, the fictional husband and babysitter were fooling around, and felt the best place to confess their sins was on daytime TV. They were very talented and did a convincing job.

The comedians told me they wanted to go public with their hoax. I thought it was a fun prank – something that could reinforce my client’s positioning as an edgy club and build some awareness for the young comedians. So I took it on, wrote a news release, and we waited till it aired.

And when it did, I unleashed my news.

Did I blast it out to all and sundry? Not by a long shot. I had a strategy. I would send it to two journalists – one, who I knew liked to stir up trouble and the second who had ties to a wire service that could amplify the story.

Within a few hours, my phones (work, cell, and home) started ringing and by the time the story broke, they didn’t stop ringing for two full days. There were requests for interviews, comments, columns, TV, and radio appearances – and two long messages from the show’s executive producer who went ballistic and hurled obscenities and threats at me.

The story went viral in the sense that it was picked up across North America. And it was big news for two days. And then, as quickly as it happened, it faded away.

Here’s what I learned:

Fire breeds fire: When a story’s hot, it fans its own flames and continues to get amplified. That’s the same with social media. I didn’t create the virality, but by knowing who to reach out to and engage with, I was able to spark the story and help it grow.

It’s all about timing: Those two days were the busiest of my life. But day three? Everything went back to normal. The media had moved on and the comedians and I had to, too. Lesson? Every story has its natural end – and some are over sooner than others. Communicators need to know how to frame their news and make it timely. And they have to understand when to stop flogging it. The secret of PR is the same as the secret of comedy: Timing.

Do you have the right goal? What happened to the comedians? Not much. They were big news for a short period of time. They exposed the show and got some attention for that. But they didn’t have an idea for a second act so it became a blip that didn’t propel their career. It demonstrates again that output as in coverage isn’t enough, you should be aiming for an outcome that can take you to the next level.

And me? I learned how to juggle three phones at the same time, and ignore a belligerent American TV producer.

Have you been involved in a PR prank? How did it turn out? And would you do it again?