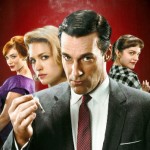 If you don’t know Sasha Muradali, go on over to her blog, Little Pink Book PR. That is where this post first was published and it came to life because we are both huge Mad Men fans. If you already read it there, by all means, ignore me today.

If you didn’t read it on Sasha’s blog, welcome to my obsession of Mad Men. I love the storyline, the characters, the old days of advertising, the three martini lunches, and the clothes…oh the clothes!

While, I love the series, the first episode of this season really rubbed me the wrong way.

If you are, however, caught up and saw the first show of this season, you’ll remember Pete fretting to Peggy about losing the Sugarberry Ham account.

Peggy suggests they hire actresses to fight over a ham in the grocery store, in order to create a sense of urgency to buy one.

However, he reluctantly agrees to go ahead with the stunt only to be pleasantly surprised when Sugarberry Ham sales are up…though not even the client knows the reason.

… And so was born public relations – in which clients begin to pay for publicity stunts.

Publicity is not PR.

PR is not publicity.

I remember when “Wag the Dog” came out.

I was only a year or so into my career and not even I could explain what I did.

But that movie helped so many people “understand” what we do. A friend said,

Shows such as Sex & the City, PoweR Girls, and SPINdustry (as Sasha blogged about here) do nothing more than sensationalize what we do for a living…and in a fairly harmful and untruthful way.

I don’t know about you, but I’ve never created a fake fight over a ham, a fake war to distract from indiscretions, created hype over a celebrity who was coming to an opening only to “back out” at the last minute, or allowed a client to spin the truth, just to make headlines.

I’m so much against this idea of our profession, in fact, that this blog is named Spin Sucks for that very reason.

The idea that no PR is bad PR is ridiculous, as evidenced by the most recent news with BP, Tiger Woods, LeBron James…need I go on?

There is such a thing as bad PR.

There is such a thing as spin.

There is a difference between nightclub openings, the paparazzi, and pairing celebrities with brands. This is publicity.

And it’s not what most of us in the public relations profession do for a living.

The problem is so much of what we do is invisible to the ‘outside’ (and even those within close proximity.)

People can confuse public relations with its end product.

While, I am positive a lot is wrong with the way Mad Men portrays the advertising agencies, let’s get real here.

Public relations and publicity are not synonymous. However, many PR campaigns include means for publicity.

Publicity spreads information to gain public awareness, typically via an advertising campaign (or stunt), for a product, person, service, cause or organization.

It is the child of effective public relations planning. Not the other way around.

‘Spin,’ on the other hand, that’s propaganda:-

“The engineering of consent is the very essence of the democratic process, the freedom to persuade and suggest.”

Encompassing social media, it bridges the gap between advertising, marketing and journalism.

Public relations was created by Edward Bernays, not by a bunch of girls in mini-skirts and too-tight shirts, not by celebrity-seeing junkies, not by a girl who is famous for a sex tape, and certainly not by an advertising agency in the 1960s.