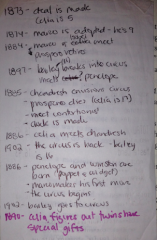 There is a new “challenge” going around on Facebook right now.

People are asking you to list 10 books that have affected your life in some way.

The rules are: Don’t take more than a few minutes and don’t think too hard. They don’t have to be the “right” books or great works of literature, just ones that have affected you in some way. Tag some friends and you’re done!

I’ve been tagged by three people (thank you Kate Nolan, Bill Smith, and Pascale Bishop) and I’ve had a hard time with it. Because, you know, “don’t think too hard” doesn’t apply when you’re asked to choose just 10 books.

But then I read that September 6 is Read a Book Day and decided to not only take the challenge, but to post it here (albeit a couple of days early).

You know, in honor of GO READ A BOOK (I type this as I settle down to watch episode 5 of season 3 of The Killing on Netflix).

I’ll officially tag people on Facebook when I post this there, but I’d like to challenge each of you to think about the 10 books that have changed your life in some way.

If you’re so inclined, I’d love to see the list in the comments here.

If you’ve already taken the challenge, copy and paste it!

And let’s make a pact to get everyone to read a book on September 6!

P.S. The photo is of the timeline I kept while reading The Night Circus. It was that intense!