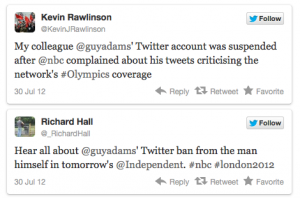 Have you ever heard of censorship?

Like many of you, Guy Adams, a writer for The Independent in Great Britain, but resident of Los Angeles, took to Twitter to criticize NBC for its tape delay of the opening ceremonies, subpar reporting, and silly policy that won’t allow us to see the games in real-time, though (by the time we see the coverage) we already know what happens.

He was relentless in his tweets, but didn’t say anything (in my opinion) I haven’t seen from my friends all over Facebook and Twitter.

Am I alone in wondering why NBC Olympics think its [sic] acceptable to pretend this road race is being broadcast live?

Adams encouraged Lauer “to shut up” and called out Gary Zenkel, the president of NBC Olympics, as the “moronic exec behind the time delay.” And he said Zenkel should be fired.

During one of his tweets about Zenkel, he tweeted the NBC executive’s email address and encouraged his followers to send him a note.

Adams said he filed a story with The Independent and, when he went to Twitter, discovered his account was gone.

But Adams insists Zenkel’s email address is easily found on Google so he didn’t, in fact, violate the Twitter terms of service.

The suspension generated speculation that NBC has been involved in the decision from Twitter because they are partners during the Olympic Games.

Whether or not the relationship (and complaint from) with NBC had anything to do with the suspension, this feels very much like censorship to me.

While there isn’t an official reading through tweets (as according to the formal definition), the objectionable parts of Adams’s Twitter account have been suspended.

If Adams had tweeted Zenkel’s home address and phone number, I can understand the suspension. But an email address that is easily found with a Google search?

What do you think? Deserved suspension or censorship?

Update: This morning, The Telegraph reported that it was Twitter who alerted NBC to the offensive tweet and walked them through how to file a complaint.