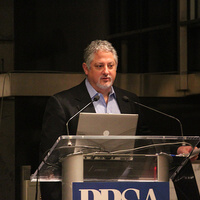 On Thursday night, Arthur Yann was on the train home from the reception before Silver Anvils when he suffered a massive heart attack and passed away. He was 48.

I first met Arthur in the same way I’ve met many of you…here on this blog.

As the vice president of public relations for our industry’s trade organization – the Public Relations Society of America (PRSA) – Arthur had the unenviable job of answering to more than 20,000 professionals.

In May of 2011, when some of our peers from Burson-Marsteller were found to have created a whisper campaign against Google on behalf of Facebook, I was on a rampage about kicking them out of PRSA and not allowing them to continue to work in the field.

It was Arthur who called me to explain, while my efforts were noble, PRSA is a membership organization and not a regulatory one so there wasn’t much they could do.

He was the one who talked me off the ledge and helped me soften my tone…and even engaged in many months-long discussion about whether or not we could regulate the industry so those things didn’t happen.

He led the charge to redefine what it is that we do…taking on a huge project as the previous definition was 30 years old and many of were very active in how to redefine what we do not for today, but for the future.

I remember seeing him at a reception during the middle of the project and asking him how it was going. He said, with a grin and a twinkle in his eye, “Let’s just say I could use a bottle of scotch.”

Scotch he received, which ingratiated me to him for life.

An accredited member of PRSA, of Counselors Academy, and both an agency leader and a corporate professional, Arthur spent his entire career years talking the vocal PR pros off the ledge with humor and a booming laugh that was infectious.

For my friends who knew him well – Greg Pitkoff, Ken Jacobs, and Keith Trivitt – I’m very sorry for your loss.

For his wife, Amy, and their daughter, Sophia, your husband and father meant a great deal to our industry. He will be sorely missed.

For information on the memorial, PRSA will update here as they learn more.