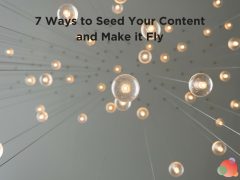 How many times have you been asked to seed a piece of content when you had no involvement in the strategy or build?

Even worse, you know the team spent big on it, so it needs to go “viral.” But you know that is not going to happen.

Although the idea might be great, that’s the easy part, seeding is difficult. And coming late to the party makes it so much harder.

With more and more teams creating content from different angles, this is happening increasingly.

They’re spending hours and hours creating really good, worthwhile content with little or no seeding plan, but that great content is not being seen.

So let’s take a quick journey to see how we got here.

What’s a Journalist to Do?

In the past, brands gave journalists information, and they were satisfied.

The model was relatively simple. Brand PR teams were the source of information and journalists took this to create stories.

Then there was the internet explosion, with more publications to target every day.

Some of the more forward-thinking communication teams were creating media centers so anyone they hadn’t proactively contacted could still find the information.

Meanwhile, journalists were criticized for using ‘PR stories.’ Content designed and created largely to promote a product or brand.

But the public was increasingly wise to those tactics, so journalists became tighter on reporting, and hard news increased.

Back in the brand camp, there is now a blog, a Twitter profile, and a whole host of communication and content platforms.

These platforms not only need teams to manage them, but they are great for hosting creative campaigns.

There is no journalist gateway, and the brand can even seed the campaign through their communication channels direct to the consumer.

It’s brilliant. It’s easy. But are you sure the impact is as big as it can be?

Yes, you can report that the company’s thousands of followers have seen it. But in reality, you know only a handful have.

And are these the same followers from the last campaign and the one before? Are these already converted customers?

They are already following the brand, so it’s not as if they’re hearing about the brand for the first time.

Either way, content is now a very necessary part of the communications discipline.

During the last few years, I have seen more and more budgets and resources put towards content, and it makes sense.

But many brands are starting to invest too much time and too many resources into content no one (or at least not the right people) sees.

Having creative brainstorming sessions and creating content—be it written, videos, working with experts—is the fun part.

The hard part is getting new eyeballs on the content—and it’s by far the most important part.

You can make it easier by following these seven simple steps.

If the content creation is happening within a team different to the one seeding it, it’s imperative to work closely together throughout.

Reminding everyone to get the seeding teams onboard from the very beginning is important.

But once you have a few case studies under your belt about the additional impact working together can bring, you’ve done the hard part.

Include Impact When Evaluating Creative Brainstorms

Work impact into the plan every step of the way.

It’s very easy when wrapping up the brainstorm to choose ideas that are fun, crazy, and ingenious.

One tip when choosing the idea is to encourage the team to rate each idea under three headings: cost, impact, and creativity.

The creativity score provides an outlet for the ‘fun factor,’ and stops this impairing the other two scores. But the cost and impact of the idea are why you should choose it.

Map Out the Seeding Plan

Before you settle on an idea, the seeding plan needs to be mapped out.

And realistically, not just ‘seed to gardening sites,’ but research which ones, who to speak to, and similar stories covered.

Ideally, you could even speak to some journalists about the idea beforehand so you can include their suggestions.

If there’s not a strong list of sites you think will cover this, it’s time to think again.

Give the Seeding Team Creative Control

Or at least give the seeding team a significant voice in the process.

Let the seeding team advise on style and content.

There are so many nuances that could make or break a content seeding plan.

For instance, content teams love to add brand logos throughout, but journalists won’t consider it.

Give the Seeding Team Warning

And then more warning.

Warn them of filming and interview days.

Then they could invite influencers to content creation sessions resulting in ‘behind the scenes’ type coverage which is a great kickstart to seeding the content.

Give them warning of anything going live.

It may be this content is too brand-heavy for traditional PR tactics.

But a paid-for-audience can be very targeted, and if the idea resonates they will engage and share it.

If you are not willing to put a paid budget behind it, you have to ask yourself if deep down you believe the content is great?

Finally, you need to set objectives and measure the outcome.

Objectives, such as who you want to see it and what actions you want people to take following it, need to be set and measured.

Such measurement allows you to keep improving your content offering and the impact.

Use this to tweak your next plan accordingly. And by measuring the impact of this activity alongside that of other marketing activity, you’ll see where to invest more (or less!).

Photo by Skye Studios on Unsplash

Laura Joint is currently a Director at CoverageBook.com. She previously worked in PR (predominately in agency side) for 16 years, after studying PR at university, and describes herself as "PR through and through!"

View all posts by Laura Joint