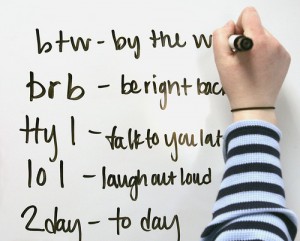 A couple of months ago, my baby sister, Laney, who is my only sister and who has four children, texted me to say that her oldest, my 13-year-old niece was dying because she had texted LOL to her.

My niece said, “I can’t believe my mom said LOL!” As if my sister is older than dirt and completely clueless about anything hip and cool (ah, teenagers).

Now we have a running joke where we use #mymomsaidlol when something strikes us as hilarious.

Fast forward to earlier this week and I received a text that said, “What r u doing?”

And, of course, she responded with, “#mymomsaidlol.”

It’s funny because it’s true, but it also drives me INSANE.

We Have Become Lazy

In today’s text, Twitter, social media world, people are getting more and more lazy about their grammar and spelling, according to This Embarrasses You and I*.

The article begins with this story:

When Caren Berg told colleagues at a recent staff meeting, “There’s new people you should meet,” her boss Don Silver broke in. “I cringe every time I hear” people misuse “is” for “are,” Mr. Silver says. He also hammers interns to stop peppering sentences with “like.” For years, he imposed a 25-cent fine on new hires for each offense. “I am losing the battle.”

And it’s not just Mr. Silver who is losing the battle. Companies across the country are fighting the same and it’s becoming an epidemic.

Schools have stopped teaching cursive handwriting. That makes sense, of course, as many of us no longer write longhand. But, along with it comes shorthand acronyms—LOL, WTH, *$, 2nite, <3, AISI, IMO, OMG —and they’re all reaching corporate world communications.

Heck, they had to create an entire dictionary on the lingo so those of us who didn’t grow up in the text world know how to understand what’s being said.

It’s not just affecting the business world. According to BBC News, students are turning in homework completely written in text.

It’s fairly easy to figure out this person went to NY to see her brother and his family during summer break, but it certainly takes more energy and thought to figure out what message is being delivered.

If this is how your customers and prospects are being communicated to/with, do you think they’re going to want to do business with you?

But it’s not just text speak that is bringing down business writing and communications. Most don’t know the difference between their, they’re, and there or its and it’s. 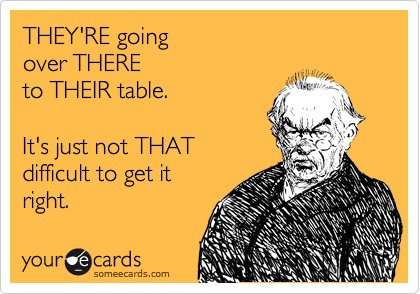 Following are six tips for better business writing. And, if you’re so inclined, for better social media status updates, too.

If you want to get serious about your business writing, check out the Associated Press Stylebook, the Chicago Manual of Style, or Strunk and White’s Elements of Style.